The existing contract with Hockey India will end in 2023. CM Naveen Patnaik decided to extend the contract for another 10 years. 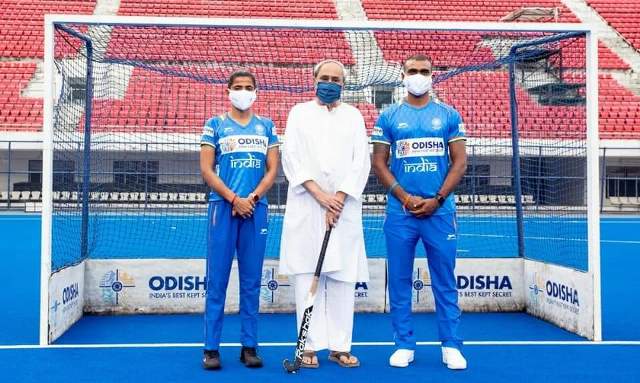 Odisha Chief Minister Naveen Patnaik made a big announcement while felicitating the Men’s and Women’s Olympics Hockey Players at the Lok Seva Bhavan today. The Odisha Government will sponsor both the national teams for another 10 years till 2033 once the existing sponsorship contract ends in 2023, he said.

As a token of regards and appreciation, each team gifted a framed Jersey autographed by the players to the Chief Minister.

“You made us all so proud with your spirited fight at Tokyo. These are deeply emotional moments for India to witness the revival of Indian Hockey. For nearly four decades, the hockey fans have been yearning to see India grab a medal at the Olympics. The way the entire country was glued to the screens to watch the Hockey teams’ matches, it is quite evident there is something more to hockey than just sports. In the back ground of the Covid pandemic, it is remarkable that our teams have worked so hard in spite of all challenges and emerged victorious. In these crisis times, the teams have brought smiles on the faces of crores of Indians. We all should be thankful to our boys and girls”,the CM added.

“We, in Odisha, are elated that our partnership with Hockey India has led to this great achievement for the country. I believe, Odisha and Hockey are destined to become synonymous. We will continue our partnership with Hockey India. Odisha will support the Indian Hockey teams for 10 more years. This will herald a new era of Indian Hockey and bring back the glory to the nation,” said Naveen Patnaik. 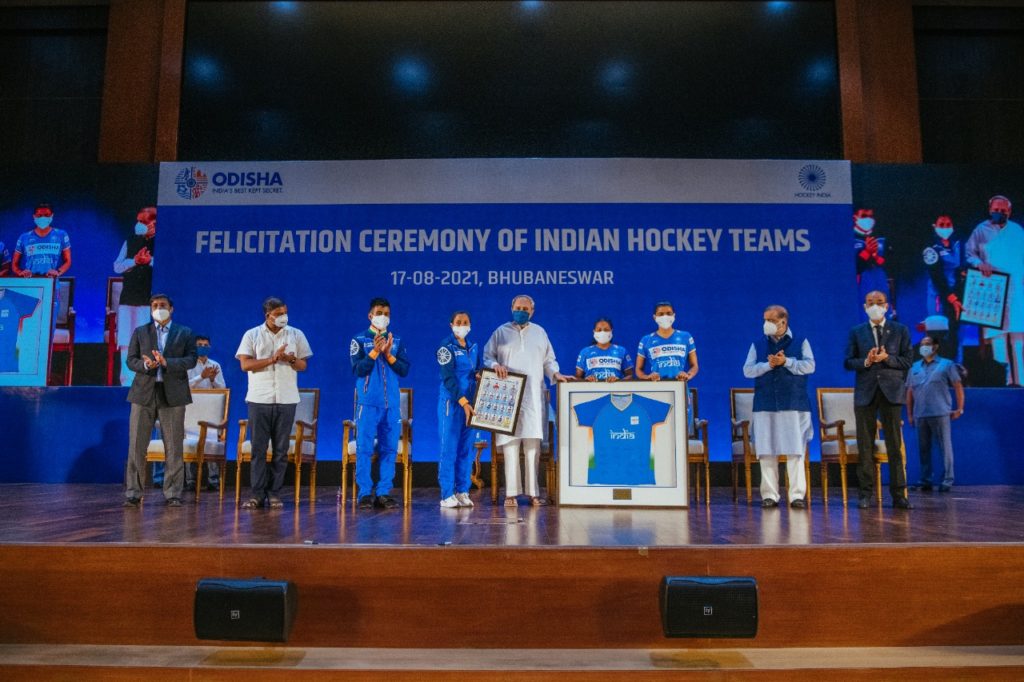 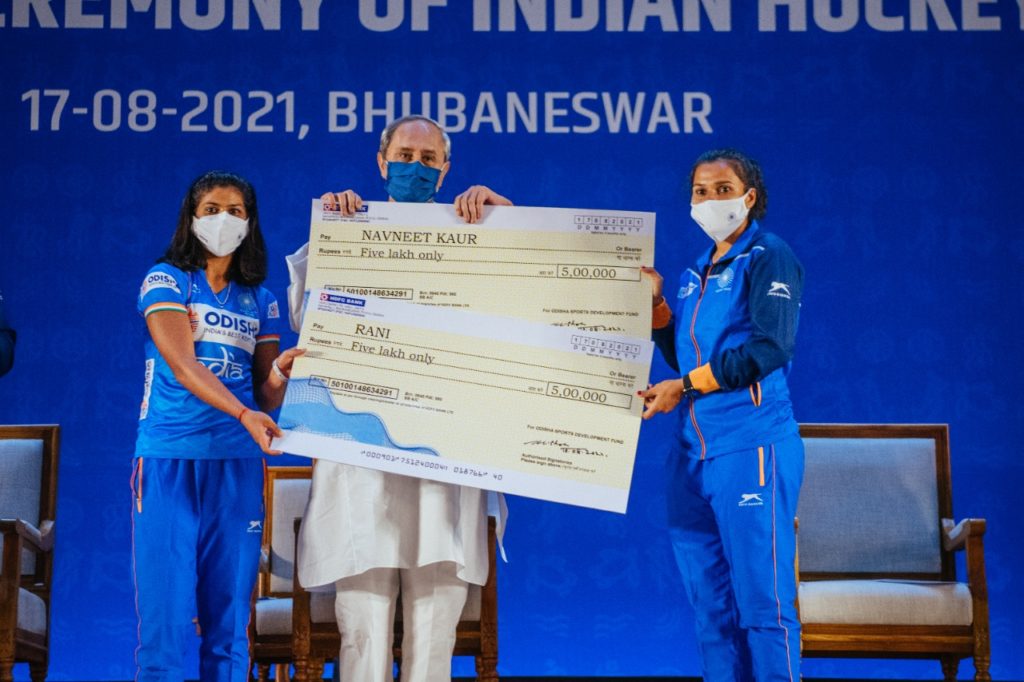 President, Indian Olympic Association, Dr Narinder Dhruv Batra who has played a key role in the development of Olympic sports and sportspersons and in the revival of hockey in India and the prominence of Hockey around the globe was also felicitated by the Chief Minister.

He also felicitated Odia Doctor, Col. (DR). Bibhu Kalyan Nayak who was appointed as the first Indian FIH Medical Officer for Tokyo Olympics and awarded him Rs 5 Lakhs at the ceremony.

Over the last decade, Hockey India has played a pivotal role in building a strong representation for India leading the teams to put up an incredible performance at the Tokyo Olympics and command top positions at the FIH ranking. And for this Chief Minister Patnaik felicitated President, Hockey India, Gyanendro Ningombam, Secretary General, Hockey India, Rajinder Singh, CEO, Hockey India, Elena Norman and the entire Hockey India staff and awarded Rs. 50 Lakhs to the Federation.

Speaking at the felicitation, President, Indian Olympic Association, Dr. Narinder Dhruv Batra, said, “I would like to take this opportunity to thank the Hon’ble Chief Minister Shri Naveen Patnaik Ji and the people of Odisha for showing their love and affection for the sport of hockey and helping our teams achieve the Olympic dream for India.”

“With your continued support, Indian Hockey will look to build on the achievements from the Tokyo Olympics, and continue this steady rise to take Indian hockey back to the elite level where it belongs,” he added.

He also felicitated the Chief Minister and other dignitaries for their unconditional support to Hockey and the national teams. 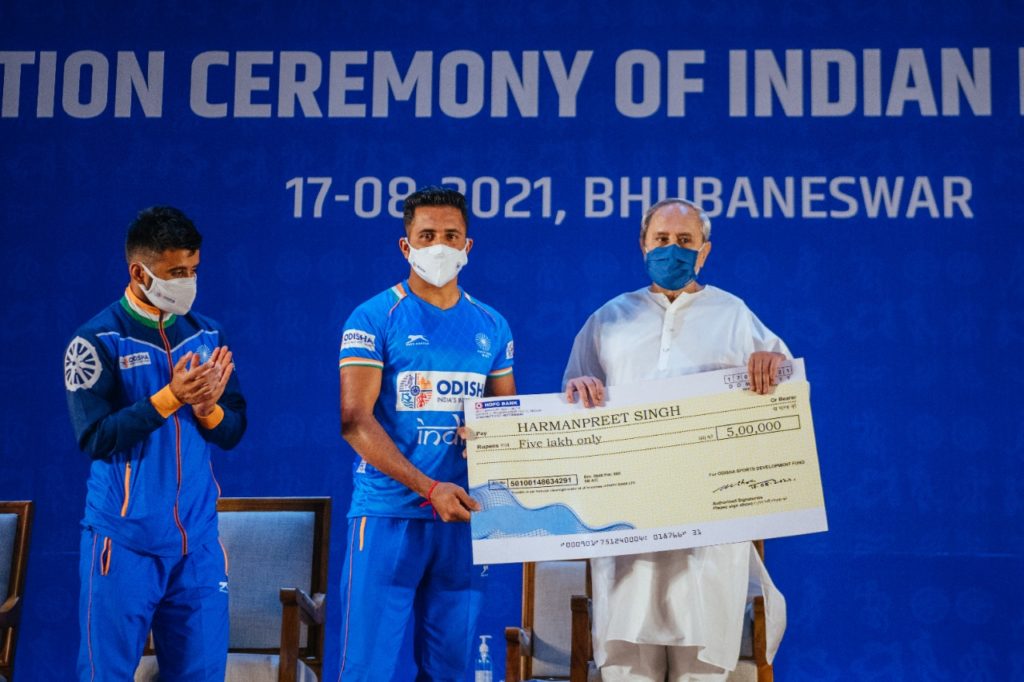 President, Hockey India, Gyanendro Ningombam, said, “This is indeed a jubilant time for Indian Hockey with both our men and women’s hockey teams achieving historic results at the Tokyo Olympics. In 2009, when Hockey India was formed, the primary aim of the federation was to bring back the glory days for hockey in the country”.

Captain of the national women’s hockey team, Rani Rampal said, “The team and I are very happy to be present here today as we wish to express our heartfelt thanks to the Odisha State Government for supporting our team. Our team is always made to feel so welcome when we come here that Odisha feels very much like the home of Indian hockey now.”

“Everyone knows that Odisha has sponsored and supported the women’s and men’s teams in the last few years, but very few people know that the people of Odisha have been a constant source of motivation and encouragement for our team. Just like Odisha is our home, the people of Odisha are like our own family”, she added.

Captain of the men’s team, Manpreet Singh shared, “It feels good to be back here in Odisha, the place we call our home away from home, and now one of the biggest reasons behind our success at the Tokyo Olympics 2020.” 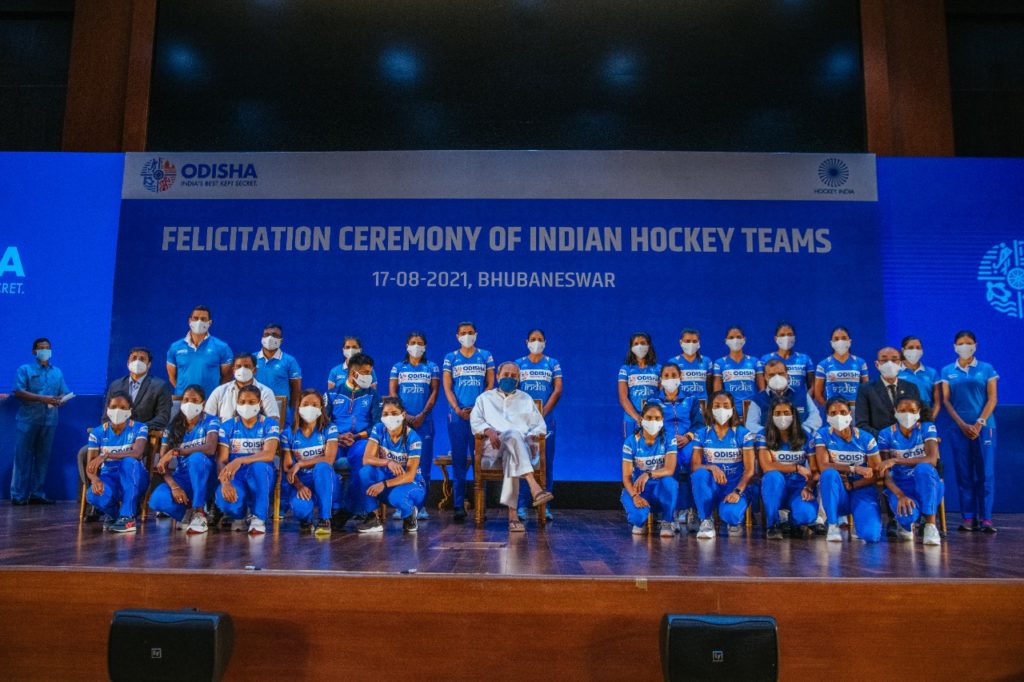 “This Bronze Medal may have been won by us as players, but in truth, it equally belongs to India, a gift from the Hon’ble Chief Minister Shri Naveen Patnaik ji whose vision and constant encouragement helped us achieve our dream of winning an Olympic medal after 41 years,” he added.

“He is a pillar of support for each one of us, and this dream wouldn’t be possible to achieve without his guidance and continued support. Everyone here, has a special love for hockey, and it’s an honour to share that same love with them,” said Manpreet Singh.

Earlier in the day, the teams arrived to a rousing welcome at the airport by fans and sportspersons alike. The atmosphere was euphoric with fanfare, celebrations and pride. They were received by Sports and Youth Services Minister Tusharkanti Behera, Chairman, Odisha Hockey Promotion Council Dilip Tirkey, Commissioner-cum-Secretary, Sports and Youth Services, Government of Odisha, R. Vineel Krishna.

The hockey teams were greeted warmly at the Biju Patnaik International Airport by the sponsoring state, amidst dhol rhythms, traditional dancing, and cheers. The players were taken from the airport to a hotel in the city under strict surveillance.

Tusharkanti Behera, the state’s sports minister, stated in a tweet : “Welcome Back team India!! After spectacular performances by the @TheHockeyIndia teams in the #TokyoOlympics2020, they have been invited today with all hearts to #Bhubaneswar for the facilitation ceremony organised by the Government of Odisha.”

Earlier, the state government had given Birendra Lakra and Amit Rohidas monetary rewards of Rs 2.5 crore each as well as DSP rank posts in Odisha Police. Deep Grace Ekka and Namita Toppo, members of the Indian women’s squad, have each been awarded Rs 50 lakh. 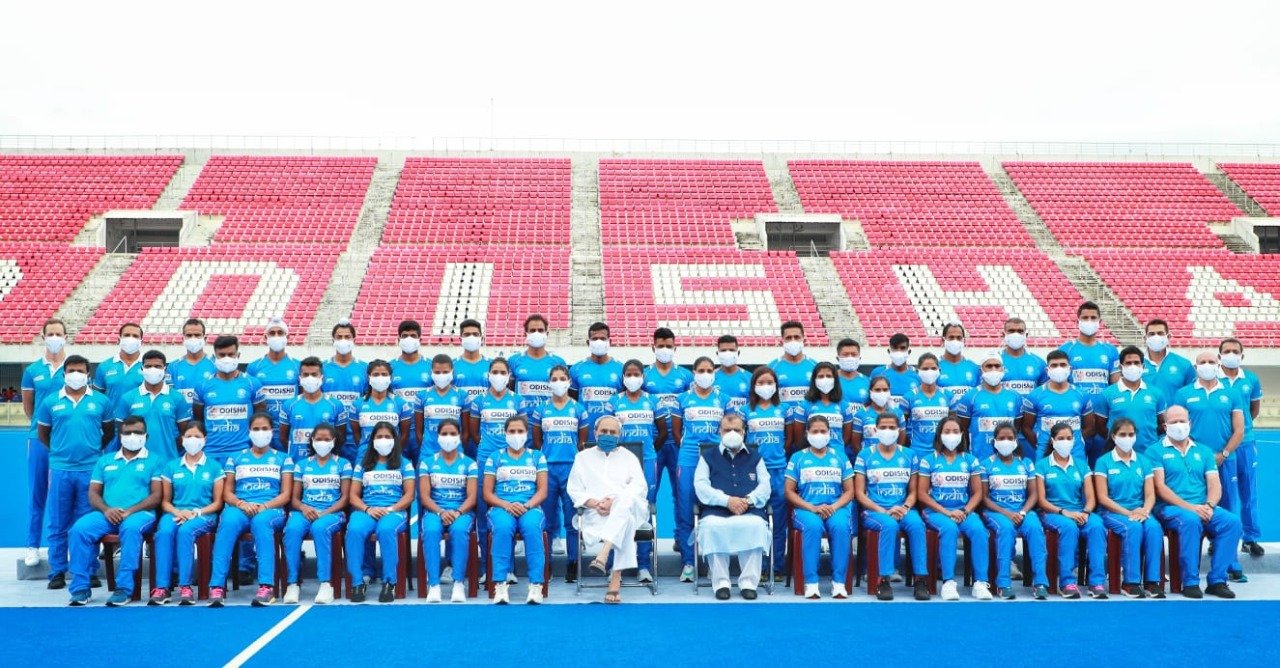 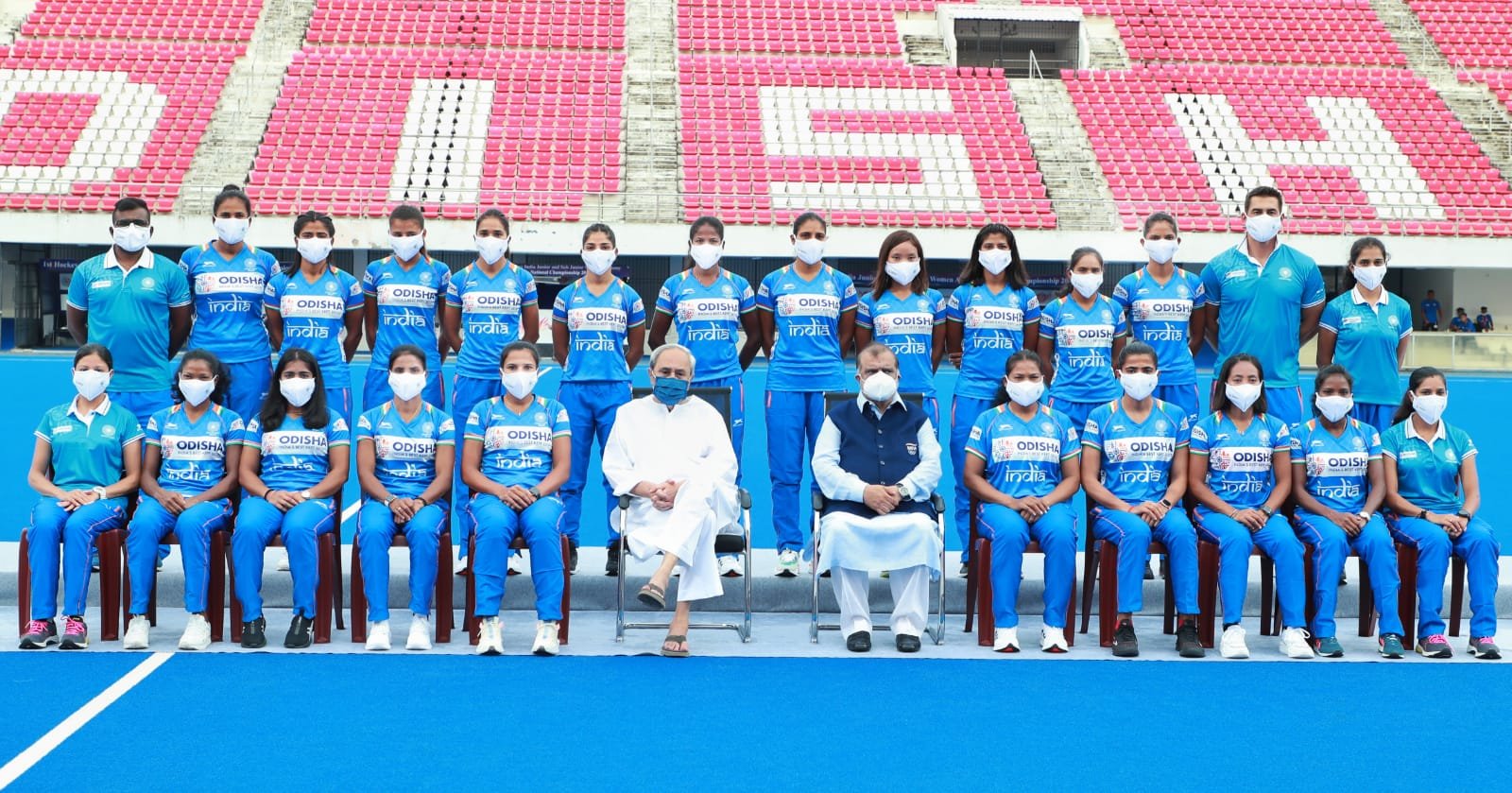 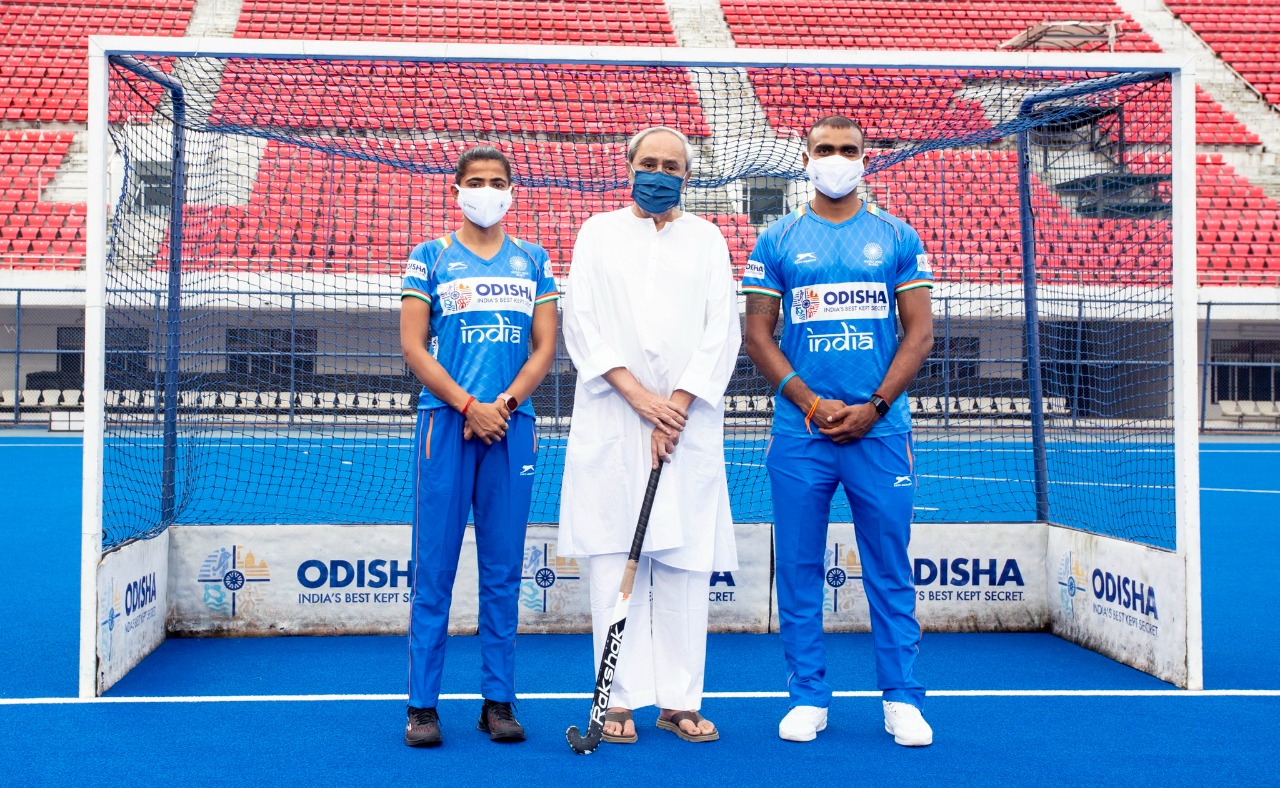 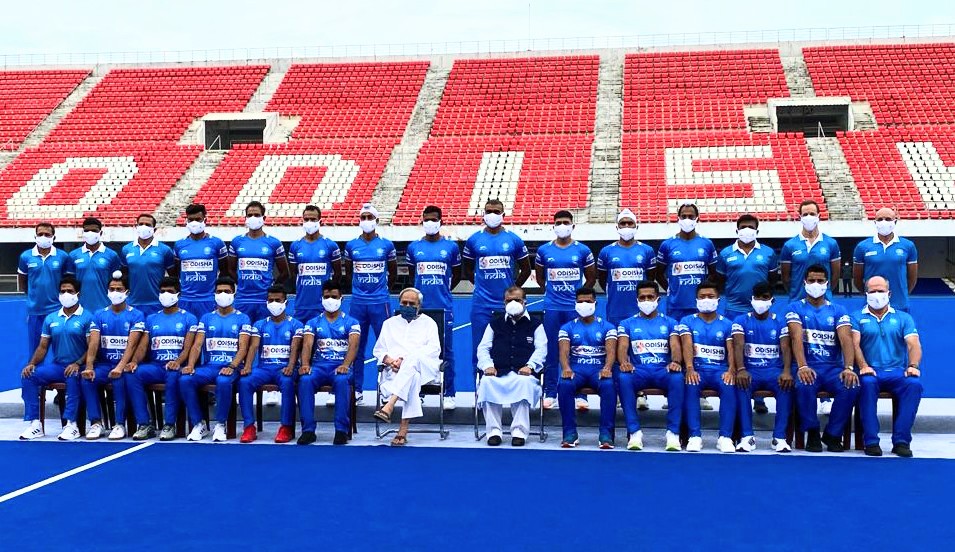