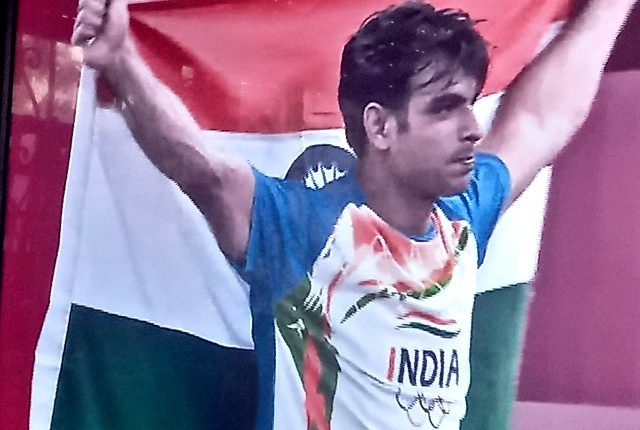 TNI Bureau:  Breaking News! Neeraj Chopra scripted history by winning the Gold Medal in Javelin Throw at Tokyo Olympics 2020 bringing home India’s maiden gold medal in athletics. His performance in the finals was outstanding and phenomenal. After Abhinav Bindra won India its  first-ever individual Olympic Games gold medal with victory in the 10m air rifle event in Beijing 2008, this is the second individual Olympic gold for the nation.

After the sixth throw, Neeraj Chopra grabbed the Indian flag and started running around the stadium. Yes, he knew he created history for India.

In his first try, the 23-year-old threw an amazing 87.03 metres. The Indian is off to a terrific start. With a distance of 87.58 metres, his second throw bettered his first. The third throw of Neeraj Chopra is just 76.79, but his second throw of 87.58 is still the greatest on the board. Chopra’s fourth and fifth throw was  a foul, yet he was still the best on the board. His sixth and final throw was a distance of 84.24 metres. 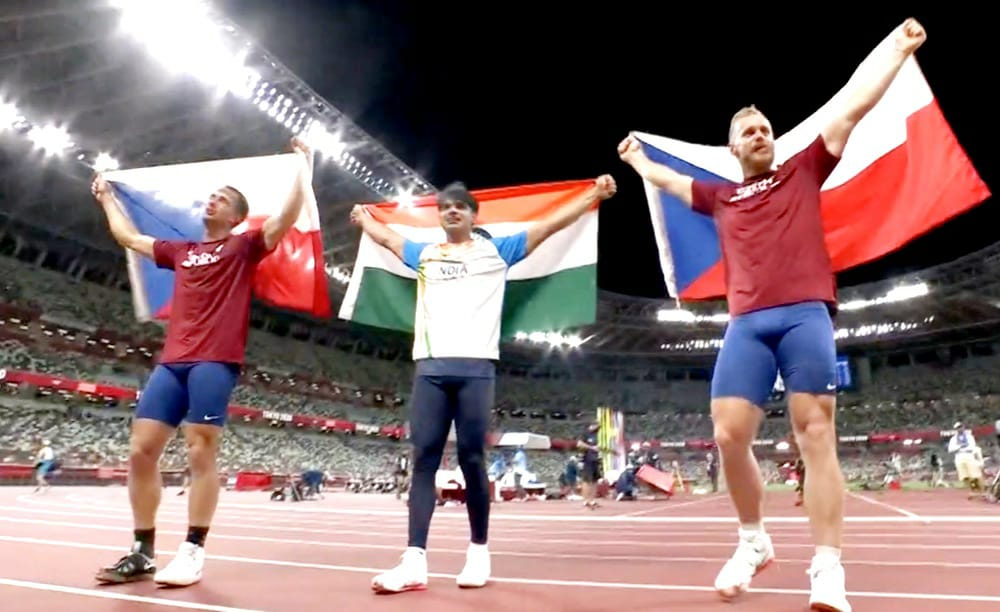 Neeraj Chopra hails from Khandra village in Haryana’s Panipat district. He received his education at Chandigarh’s DAV College. In 2016, he was reached the rank of Naib Subedar in the Indian Army as a Junior Commissioned Officer. Chopra’s previous best was a gold-medal winning throw of 88.06 metres at the 2018 Asian and Commonwealth Games.

With a throw of 82.23 metres, Neeraj earned a gold medal in the 2016 South Asian Games, equaling the Indian national record. In Bydgoszcz, Poland, he won gold in the 2016 IAAF World U20 Championships. He also established a junior world record. Despite these achievements, he was unable to qualify for the 2016 Summer Olympics due to the deadline of July 11th.

With a throw of 87.43 metres in the Doha Diamond League in May 2018, he surpassed the national record for the second time. Chopra was also chosen to be the flag-bearer for India in the 2018 Asian Games, which was his first participation at an Asian Games. On August 27, 2018, Neeraj created a new Indian national record by throwing a distance of 88.06 metres to win gold in the Men’s javelin throw at the 2018 Asian Games.

Neeraj Chopra broke his previous National Record on March 5, 2021, establishing a new one of 88.07m, giving him a World Leading position in 2021. He began his 2021 international season with a javelin gold medal performance at Lisbon, Portugal, with a throw of 83.18 metres.