Just like other Indian festivals, they buy new clothes and dress up every day and indulge in holy festivities. 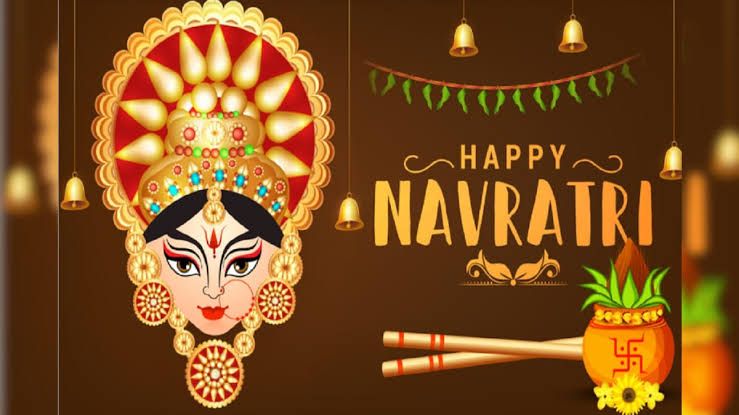 TNI Bureau: The festival of Shardiya Navaratri, one of the auspicious Hindu festivals is celebrated for nine days.

The Navratri which begins this year on September 26 and ends on October 5 with Dussehra. Devotees fast diligently for all nine nights to seek the blessings of the Goddess. Just like other Indian festivals, they buy new clothes and dress up every day and indulge in holy festivities.

Each day of this festival holds a different significance and is dedicated to the nine avatars of Maa Durga. Durga, the consort of Lord Shiva, assumed different avatars, each of which is invoked on every day of the festival starting with Shailputri, followed by Brahmcharini, Chandraghanta, Kushmanda, Skandmata, Katyayani, Kaalratri, Mahagauri and Siddhidatri.

Also each day of the festival is dedicated to a colour and people usually dress up in that colour. Broadly, the nine colours are: yellow, green, grey, orange, white, red, royal blue, pink, and purple.

While white is synonymous with purity and innocence, red symbolises passion and love; royal blue represents tranquillity and yellow denotes festive cheer and happiness. Green is a symbol of growth and fertility, and grey represents balance of emotions. Orange stands for warmth and positive energy, peacock green for uniqueness and individuality; and finally, pink is for love, affection and harmony.

Here is the significance of the nine days of Navratri with their respective goddesses:

On the first day of Navratri, Maa Shailputri also known as Hemavati and Parvati is worshipped.

Shailaputri meaning ‘the daughter of the mountains was born to the daughter of King of mountains (Parvatraj) Himalaya or Himavat and Maina. She is also commonly known as Parvati and is the first of the nine Navadurga. She is depicted having two hands, holding a trident in her right hand and a lotus in her left. Being the wife of Lord Shiva, she rides on his bull named Nandi. Brahmacharini: In the second avatar, holding a rosary in her right hand and a Kamandala (water pot) in her left hand, Brahmacharini signifies Tapasya or penance. 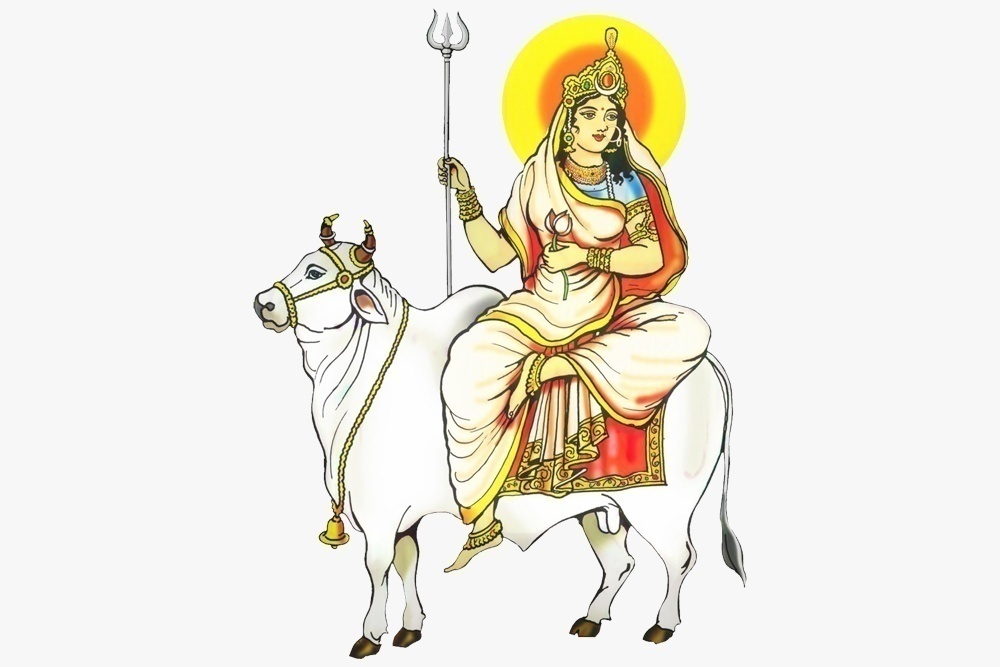 The second day is dedicated to the Goddess Brahmacharini, who is known as the Goddess of sacrifice and discipline.

Maa Brahmacharini is depicted as walking bare feet in white garb. She has two hands and carries Jap Mala (a rudraksh rosary)

In the second avatar, holding a rosary in her right hand and a Kamandala (water pot) in her left hand, Brahmacharini signifies Tapasya or penance. On the third day of Navaratri, Maa Chandraghanta is worshipped by devotees of Goddess Durga. She rides on a lion and is believed to destroy all evil and wicked.

Shiva brought with him the strangest wedding procession also known as Baraat, consisting of ghosts, Aghoris, sages, ascetics and every being unimaginable. Upon seeing this sight, Parvati’s mother and relatives were left in shock, mostly out of terror. To avoid any embarrassment to her family or to Shiva, Parvati transformed herself into a terrifying form Chandraghanta. 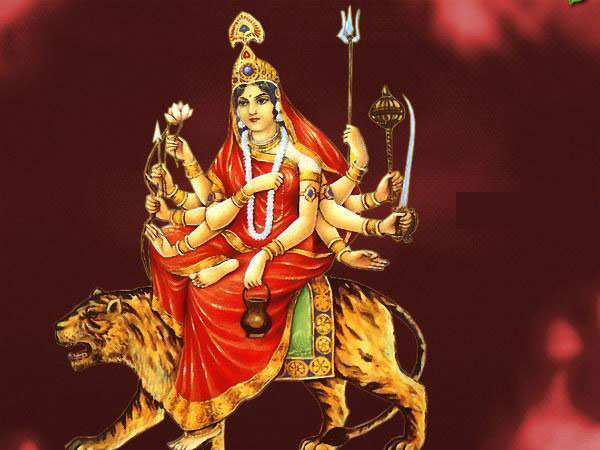 Devi Kushmanda is worshipped on the fourth day of Navaratri. It is believed that Kushmanda is the ultimate source of life. Maa Kushmanda bestows good health, and strength upon her worshippers.

On the fifth day, Goddess Skandamata is worshipped. Skandamata literally means the mother of Skanda. Skanda is another name of Lord Karthikeya, often known as Murugan in the South. She rides a lion and has four arms. Two of her arms carry lotus, one is raised in blessing while the fourth holds her son Karthikeya. 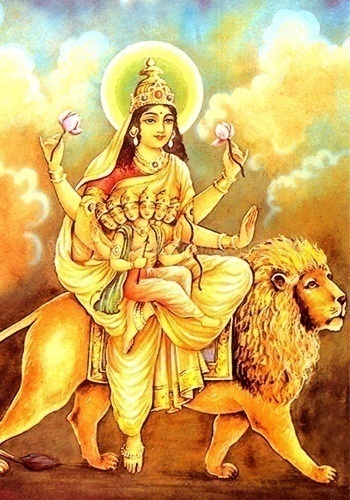 On the sixth day, Maa Katyayani is worshipped. Maa Katyayani is believed to have destroyed the demon, Mahisasura. This is the form that is often referred to as Durga. She took birth as the daughter of Sage Katyayan and hence came to be known as Katyayani. 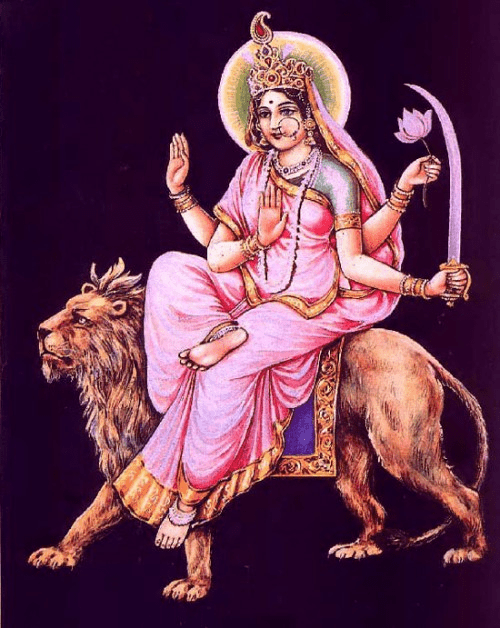 Kaal refers to death and Ratri means night. Hence, Ma Kaalratri is the one who brings an end or death to anything that is associated with evil or darkness. She is more commonly referred to as Kali and is worshipped on the seventh day. Kaalratri is the most terrorizing form of Durga. Worshipped on eighth day, the story of Mahagauri has many versions. Maha means great and Gauri means white or bright like the moon.  She blesses her devotees with wealth and well-being and helps them to attain salvation. 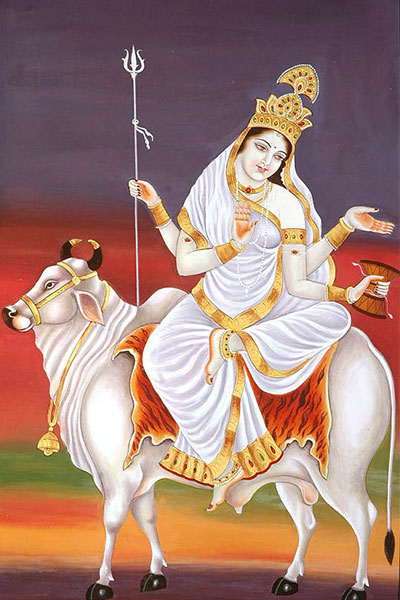 On the final day of Navratri, Maa Siddhidatri is worshipped with inherent healing abilities.

Siddhidatri is the Adi Shakti avatar of Durga. She existed as pure energy and had no physical form. Lord Rudra worshipped her for creating the universe and she appeared from the left half of Shiva. That is why she and Shiva represent the duality of the universe in the form of masculine and feminine energies. They unite to form Ardhanarishwara. 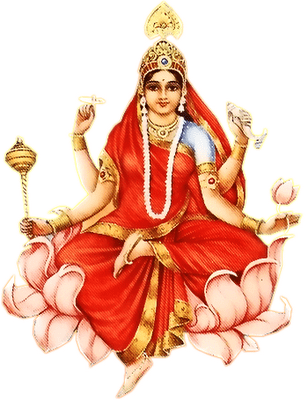