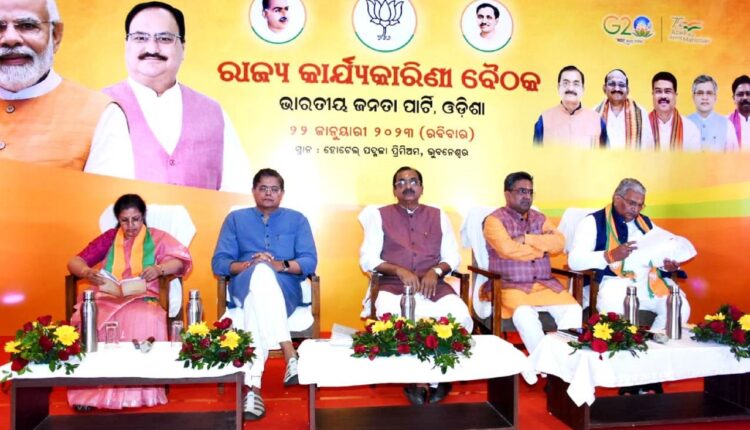 TNI Bureau: The Odisha unit of the Bharatiya Janata Party (BJP) during its two-day State Executive Meeting here in Bhubaneswar prepared a two-point agenda for the upcoming Lok Sabha and State Assembly elections in 2024.

Addressing the media persons, party’s State general secretary Golak Mohapatra said that the saffron party has chalked out two-point strategy to boost the party’s winning prospects in the 2024 elections.

The first point strategy is to strengthen the organisation at the booth level and the second strategy is ‘political fight’ against the BJD government in Odisha.

Mohapatra informed that the lotus party will make all the party members active at the booth level and take various welfare schemes of the Centre to the people in the next four months.

This apart, the party leaders and workers will also highlight the hijacking of various central schemes by the Odisha government. They will also expose the incompetency of the BJD government, Mohapatra said.

Mohapatra further said that the party will highlight before the police how the BJD government is preventing eligible beneficiaries from getting houses under the Pradhan Mantri Awas Yojana (PMAY) of the central government.

The will also stage protest across the State with an aim to sensitise people how the eligible beneficiaries have been excluded from the PMAY list while ineligible people have been included, he added.

The party’s State general secretary also informed that the party members will visit mandis to look into farmers’ different problems including the alleged non-procurement of paddy and katni-chatni.