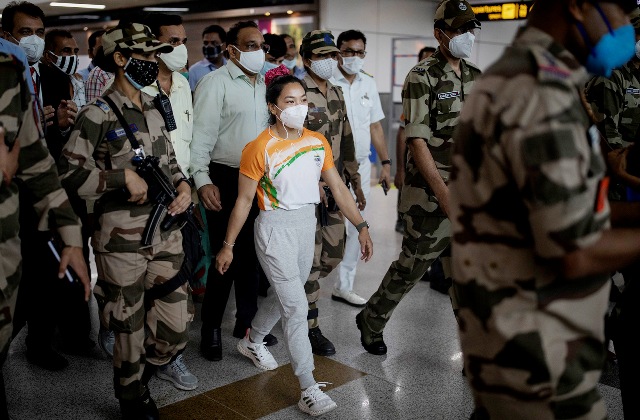 TNI Bureau:  Mirabai Chanu, an Indian weightlifter who won silver in the women’s 49kg division in the Tokyo Olympics, returned from Tokyo to a rousing welcome amidst tight security at the Indira Gandhi International Airport in Delhi on Monday.  The silver medallist underwent a mandatory RT-PCR test at the Delhi airport.

Hailing from Manipur, the 26-year-old lifted a total of 202 kg to emerge second behind China’s Hou Zhihui, who won the gold at 210 kg.

She was greeted with chants of “Bharat Mata ki Jai” and other patriotic slogans when she arrived in the capital. Security personnel escorted the Manipur athlete out of the airport. Despite the fact that Mirabai was wearing her India training jersey, she did not have the silver medal around her neck.

The Manipur iron lady lifted a total of 202kg (87kg+115kg) to surpass Karnam Malleswari’s bronze medal at the Sydney Olympics in 2000.

Let's welcome our champion with a loud cheer🗣️