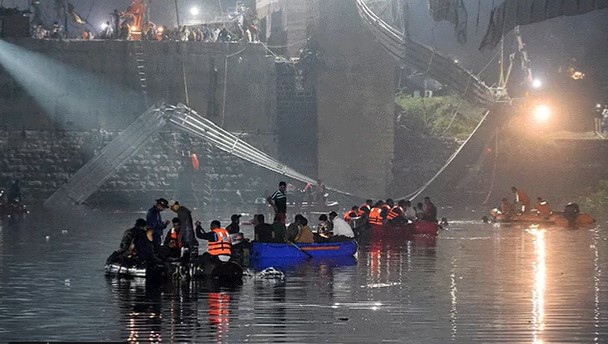 TNI Bureau: The death toll in the Morbi hanging bridge collapse incident increased to 132, while 177 people have been rescued so far, Gujarat Home Minister Harsh Sanghavi said on Monday.

The tragedy took place on Sunday evening when about 500 people were on the suspension bridge on the Machhu river, which is five times the carrying capacity of the bridge.

More than a century-old bridge, which had reopened on October 26 after extensive repairs collapsed.

All three defence services including Navy, Air Force and Army have deployed their teams for search operations who have worked the entire night.

Indian Army team including doctors, paramedical staff and other relief material reached the spot at night.

Prime Minister Narendra Modi, who is on a three-day tour to Gujarat and Rajasthan cancelled his roadshow following the Morbi cable bridge collapse incident.

Criminal cases under section 304, 308 and 114 of IPC have been registered on the management team of the bridge. A high-level probe has also been ordered.

Morbi town observes a bandh on Monday to mourn the deaths of people who died in the incident.

The accident took place amid election preparations in the State. The dates, however, are yet to be announced by the Election Commission of India.

Man gets Documents back from the Thief who stole his Laptop