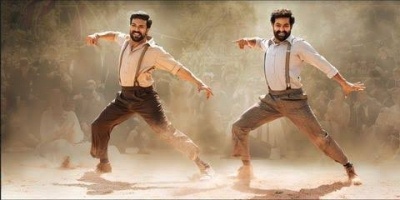 The Rajamouli’s ‘Naatu Naatu’ competed with ‘Carolina’ from “Where the Crawdads Sing,” “Ciao Papa” from Guillermo del Toro’s “Pinocchio,” “Hold My Hand” from “Top Gun: Maverick,” and “Lift Me Up” from “Black Panther: Wakanda Forever”.

M. M. Keeravani, the composer of ‘Naatu Naatu’ received the honour along with his wife Srivalli.

While receiving the award, Keeravani dedicated it to ‘RRR’ director Rajamouli as well as to the lead actors – Ram Charan and NTR Jr.

‘RRR’ is based on the fictional friendship of two real-life Indian revolutionaries, Alluri Sitarama Raju and Komaram Bheem, and their fight against the British Raj. Set in the 1920s, the plot delves into an undocumented period in their lives when both revolutionaries chose to remain anonymous before fighting for their country.

Tremors in Pakistan, PoK region want to merge with India