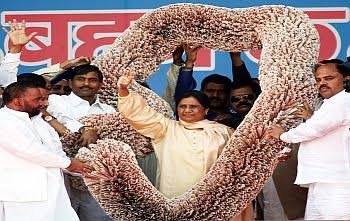 Insight Bureau: Who will digest the fact that a party which ruled Uttar Pradesh with 206 seats in 2007 and dominated the Uttar Pradesh politics for years, will struggle to manage to win even one seat 15 years later? But, it happened. Even the bitter critics of Mayawati are baffled by her unprecedented fall.

Was Mayawati even interested to fight the assembly polls in Uttar Pradesh? The ED, CBI cases as well as demonetisation have rattled her and forced her to “fall in line”, political pundits believe.

Those who know Mayawati closely, they admit that she does not believe in ideology and moral values. She acts as per the opportunity. Her only goal was to defeat Samajwadi Party and safeguard her own interests, which she effectively did.

“I am Shocked, Distressed”, says Naveen on…

Even with just one seat, she is not dubbed as a loser in UP Polls and everyone knows the reasons. While BSP won 2 seats in Uttarakhand (70) and 1 seat in Punjab (117), winning just one seat out of 403 seats in their own State, is not a normal phenomenon.

Although she gave different reasons, Mayawati admitted that the BSP votes were silently transferred to BJP in the recently concluded Uttar Pradesh Assembly Polls. The party lost 9% vote share as compared to 2017 polls. And, those votes played a decisive role in changing the poll outcome in Uttar Pradesh.

While Priyanka Gandhi Vadra (209), Yogi Adityanath (203), Akhilesh Yadav (131) and PM Modi (28) held good number of rallies and roadshows during Uttar Pradesh polls, Mayawati restricted herself to just 18 rallies. Neither she nor her party showed the killer instinct. It looked like they fought to lose. It was just a symbolic battle for BSP in 2022, and there is no ambiguity in it.

Is it the end of the road for Mayawati? Or, does she have a better plan to lie low and then bounce back? As long as BJP remains strong nationally, it won’t be easy for Mayawati to defy them because of her own compulsions.

“I am Shocked, Distressed”, says Naveen on demise of Naba Das