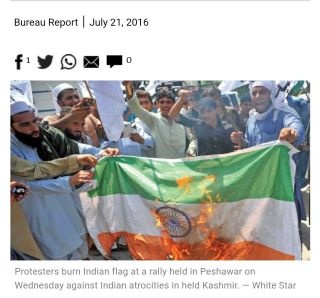 TNI Bureau: As the anti-CAA protesters use Tiranga or Tricolor in their rallies, their critics lashed out at them, questioning their patriotism and nationalism citing “past incidents”. Some viral images claimed that they were burning the same Tiranga earlier, but changed their color now.

An image displaying some radical Muslims burning the Tricolor in one frame and anti-CAA protesters holding and waving Tiranga in another frame, has gone viral on Social Media.

However, Reverse Image Search as well as news articles available on the Web, confirmed that the Tiranga burning incident was not from India. It was an old image of July 2016 from Peshawar in Pakistan when the anti-India protesters set the Indian Tricolor on fire.

While there are some fanatics in India who disregard the Tricolor and don’t respect the Indian Constitution, this particular image is from Pakistan. That’s the message we want to convey through our Fact Check system.

Let’s not fall prey to fake news without verifying the truth.