Since returning to China from the Shanghai Cooperation Organization (SCO) summit in Samarkand, Uzbekistan on September 16, this was his first public appearance. 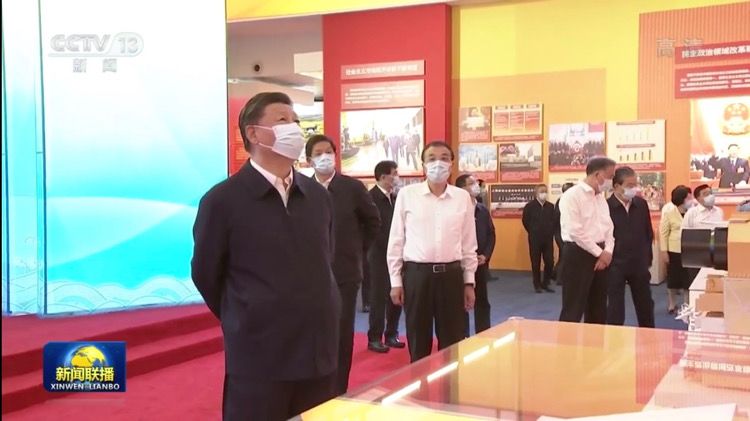 TNI Bureau: Xi Jinping, the President of China, debunked unfounded rumors that he was placed under house arrest by attending an exhibition in Beijing on Tuesday. Since returning to China from the Shanghai Cooperation Organization (SCO) summit in Samarkand, Uzbekistan on September 16, this was his first public appearance.

In all probability, he was under quarantine as per the Covid guidelines.

Since Xi left the spotlight after attending a conference in Uzbekistan, there have been unfounded rumors of a military coup in Beijing.

Xi is well-positioned to win a third term in office and continue to further his lofty goal of “rejuvenating the Chinese country” for many years to come, despite a stagnant economy, the COVID-19 pandemic, infrequent public protests, increased frictions with the West, and tensions over Taiwan.

Since becoming the party general secretary a decade ago, Xi has progressively increased his level of control and reduced the room for disagreement and criticism. China has also stepped up its assertiveness on the international stage as a rival to the US-led post-World War II system.

When he abolished the two-term presidential limit in 2018, the 69-year-old president paved the way for his likely ascent to a third five-year term and potentially more.

During his decade-long rule in power, Xi has implemented rigorous COVID lockdowns in the cities to stop the spread of the disease as well as crackdowns on party corruption that, according to some observers, were intended to bring down political competitors.

The international community has harshly criticized Xi for his repressive actions in the northwest region of Xinjiang, where an estimated million Uighurs and other Muslim minorities have been arrested in a massive campaign purportedly intended to combat “terrorism.”

Senior officials were removed in advance of the Chinese Communist Party’s (CCP) once-every-five-year congress on October 16, when it is expected that Xi will be re-elected as leader for a third time. On suspicion of corruption, former police chiefs from Shanghai, Chongqing, and Shanxi were detained together with former vice minister of public security Sun Lijun, former justice minister Fu Zhenghua, and others.

The arrests were the largest political crackdown in recent years in China.

The 2,300 CCP central committee delegates were listed in state media’s announcement on Sunday. Xi’s inclusion on the list further dispelled online rumors that a military coup was taking place in Beijing. These rumors had been spread due to flight cancellations and footage of military vehicles that had no supporting documentation.