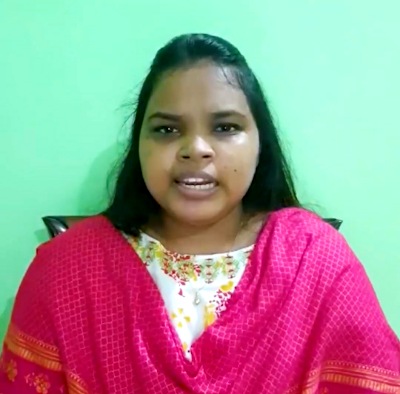 TNI Bureau: Keonjhar MP Chandrani Murmu who was a victim of a “fake viral video” in 2019, has broken her silence and lashed out at OTV and its owners accusing them of shielding the “accused”. The development is aimed at countering the perception battle that OTV was winning against the BJD with the help of National Media.

“I am a young, unmarried tribal lady. I was mentally harassed and tortured by OTV reporters and others who fabricated and circulated an obscene video of mine with malicious intention to defame and mentally torture me. While a junior OTV reporter was arrested at that time, the main perpetrator was Senior Journalist Ramesh Rath,” she alleged.

“When Ramesh Rath was questioned by the Keonjhar Police, OTV and their owners Jay Panda and Jagi Panda tried to save him with the narrative that it was an attack on media. I would like ask Jay and Jagi, had a daughter from their family been in my place and her morphed and obscene video had gone viral, would they still try to save the perpetrator of the crime,” asks Chandrani.

She also accused Jay Panda and Jagi Panda of using their connections in Delhi to run a “fake story” that media is under attack in Odisha.

“I want to ask the National Media whether they would save a journalist if he commits crime against their daughters. Does a journalist enjoy the immunity even if he commits a crime just because he is from media? As a tribal lady, my honour and dignity was defamed in public. I want justice”.

“OTV owners Jay and Jagi Panda are trying to divert attention from the main issue using their connection and peddling false narratives. If it happens to the youngest woman MP of India, who is also a tribal lady, then what would be the fate of common women of India,” she asked.

“If justice is not delivered to me because of OTV, Jay Panda and Jagi Panda, it would be a sad day for Indian democracy. Future of the women would be in dark. Mrs. Jagi Panda is also a woman. Where is her conscience?,” asked Chandrani Murmu.