Argument between Xi and Trudeau at G20! Video goes Viral

"And that's not the way the conversation was handled if there is sincerity on your part." - Xi 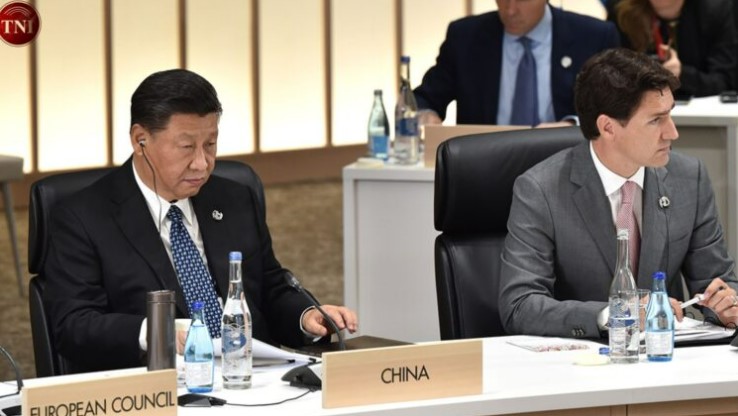 TNI Bureau: On the G20 premises, Canadian Prime Minister Justin Trudeau and Chinese President Xi Jinping got into an argument after the latter allegedly leaked his talk with the former to the press. The argument between the two leaders was videotaped and has since gone viral.

In the video, xi could be heard complaining that the Canadian Press was informed about negotiations between China and Canada.

Earlier on Tuesday, the two leaders held a meeting outside of the summit. The Canadian Pool camera caught a heated exchange between Prime Minister Trudeau and Chinese President Xi today at the G20. According to a tweet from Annie Bergeron-Oliver of the Canadian press CTV National News, xi expressed his displeasure that everything discussed yesterday “has been leaked to the paper(s), that’s not appropriate… & that’s not the way the conversation was conducted.”

The Cdn Pool cam captured a tough talk between Chinese President Xi & PM Trudeau at the G20 today. In it, Xi express his displeasure that everything discussed yesterday “has been leaked to the paper(s), that’s not appropriate… & that’s not the way the conversation was conducted” pic.twitter.com/Hres3vwf4Q

In addition to her tweet, she also posted a video. “Everything we determined has been leaked to the newspaper that’s not appropriate,” Xi remarked, speaking via an interpreter. “And that’s not the way the conversation was handled if there is sincerity on your part.”

There was a free, candid, and open talk, the Canadian Prime Minister is heard saying, and there would be issues where the two countries differ. “We will continue to help…work productively together but there will be many areas we will disagree on,” Trudeau stated.

Let’s first create the conditions, Xi Jinping says at the end of the video. After their short exchange, the two leaders shook hands.

During his brief conversation with Xi on the sidelines of this week’s Group of 20 (G20) meeting in Indonesia, Trudeau expressed “serious concerns” about alleged Chinese interference in Canada.

The two leaders spoke about North Korea and Russia’s invasion of Ukraine, and Trudeau “also raised our serious concerns around interference activities in Canada,” according to a readout from the office of the Canadian Prime Minister on Tuesday.