Among Us: The Most Popular Mobile Game 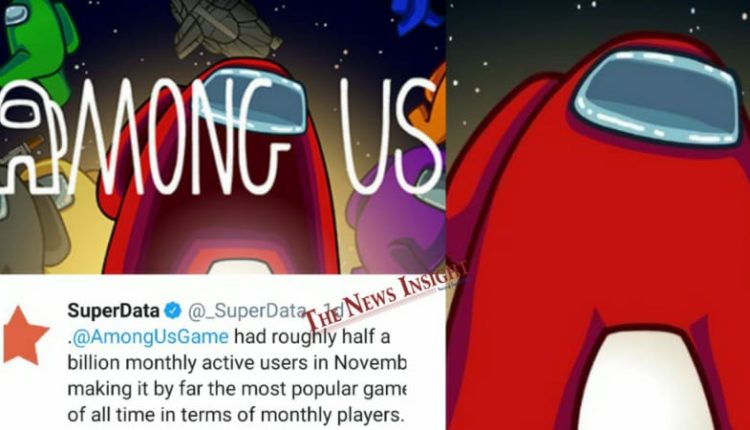 TNI Bureau: After setting a new record in November, Among Us has become the Most Popular Mobile Game in terms of monthly players. This comes after the multiplayer game reached the milestone of 500 million players in November. According to a market research firm SuperData, Among Us had more than half a billion active users in November.

However, the earning of the company is comparatively lesser as its mobile version is available for free and the PC version costs just $5 which is less as compared to other games. 64% of its earnings came from the PC version of the game with only 3% of total players playing the game on PC.

Overall, the total earnings of Digital Games in November 2020 were $11.5B which is also the highest monthly revenue ever. For mobile, Free Fire ranked no. 1 in the list of Top Grossing Games. On PC, Call of Duty bagged the 1st spot, and World of Warcraft West took first place and became the top-grossing console game in Nov 2020.

Without a doubt, Among Us has garnered huge success in the year 2020. The game was released in the year 2018 for Android and iOS and soon it will be releasing for the Xbox series. It is a space-themed game. The players get divided into Crewmates and Imposters. And the crewmates are required to identify and eliminate the imposters along with the completion of some tasks. This game gained huge popularity during the Covid lockdown with most of the streamers and YouTubers playing the game.

The game was due for a sequel and the developers even started working on the same in Aug 2020. But due to the rising popularity of the game, the developers decided to drop the idea of the sequel. Now they shifted their focus on improving the original game.

Now the Among Us developers are working on a map for the game. It will be known as The Airship and the owners have already announced that it will release early next year. Game Lovers are expecting some major changes in the game soon.