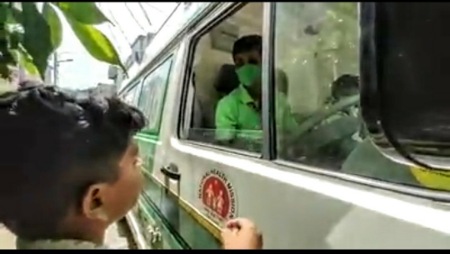 TNI Bureau:  In a shocking development, a patient in Prahlad Nagar, Berhampur died in his house after being snubbed by 108 Ambulance. The driver can be seen in the video citing Covid-19 guidelines.

Arguments between the Ambulance Driver and the family members, including a young kid have been captured in the video.

Son of the deceased has alleged that his father died after the Ambulance Driver refused to take him to the hospital.

As per the reports, family members of the patients later tried to shift the patient in an auto-rickshaw, but the Ambulance returned and patient was rushed to hospital. But, it was too late and the could not survive. A lot of precious time was wasted during the chaos.

The Ganjam District Collector has urged people to co-operate with Ambulance staff.

Earlier, an Elderly Man in Rourkela died yesterday after he was forced to take an Ambulance that had to halt several times on the way to Bhubaneswar due to faults in the system.

WATCH: Allegedly snubbed by 108 Ambulance, Patient dies at his home in Berhampur, #Ganjam .

Statement of Son of the deceased as well as their arguments between the Ambulance Driver & Family Members captured in the viral video. #TheNewsInsight pic.twitter.com/Byev4vAu4V