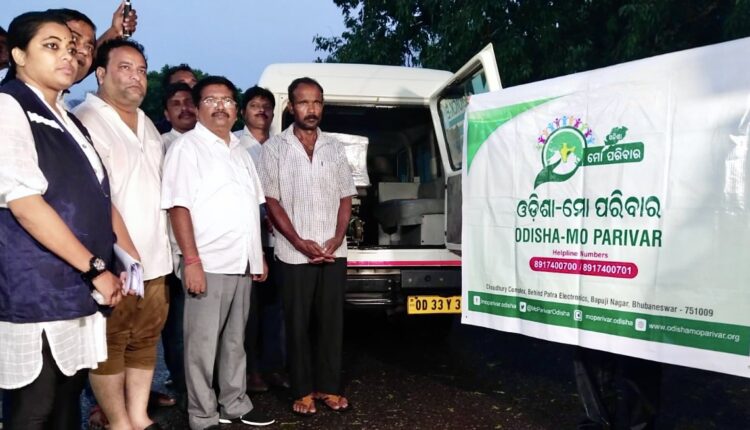 TNI Bureau: Yet again, they had to do the most difficult job, to receive the mortal remains and then consoling the bereaved family and standing with them.

This is what Odisha-Mo Parivar has been doing continuously, defying the odds. The members who receive the mortal remains get emotional at times, but they know they had to do this so that the family members of the deceased don’t face any hassles.

22-year-old Kamalakanta from Kendrapara District, who was working with a private company in Sri Lanka for the last four years, breathed his last on September 15. The family, which was devastated at this shocking news, was struggling to bring back the mortal remains.

They saw a ray of hope in Minister Atanu Sabyasachi Nayak, who was informed about the sad saga of Kamalakanata and his family. Atanu, who is also the Co-Convenor of Odisha Mo-Parivar, stepped in and engaged the Odisha-Mo Parivar to complete all formalities and bring back the dead body from Sri Lanka. The team coordinated with the Indian Embassy in Sri Lanka and the company officials of Kamalakanta to ensure smooth transfer of the mortal remains.

Minister Atanu Sabyasachi Nayak along with other Odisha-Mo Parivar officials including Rudra Narayan Samantaray, Durga Samantaray, Mihir Ray, Ranjit Ray, Satyajit Dash and others were personally present at the Airport to receive the body.

The family members were in tears to see the mortal remains, but expressed heartfelt gratitude to Odisha-Mo Parivar for their selfless support.

DId You Know – The Hospital Train in Assam?