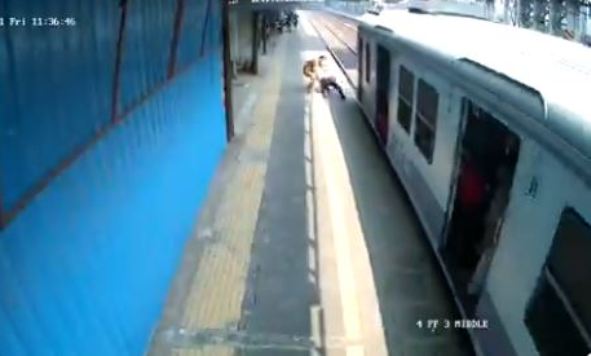 TNI Bureau:  A Mumbai Police constable came to the rescue of a man who got stuck at a railway track.

The incident was reported from Dahisar Railway Station in Mumbai on Friday.

The CCTV footage of the railway station shows a 60-year-old man, identified as Ganpat Solankhi, was getting on the railway track to pick up his shoe which had fallen while he was trying to cross the platform via the track.

A cop standing on the platform rushed to the platform and asked the man to get off the track and alerted him about an approaching train. But the man does not pay much attention to the cop and walks on the tracks thinking that he can make it to the platform on time.

The cop, seeing the commuter in danger pulled him from platform and saved his life and then slapped him for his stupidity.