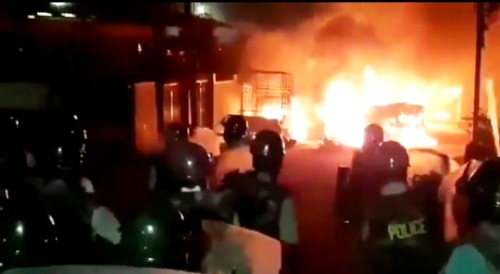 TNI Bureau: Riots broke out in Pulakeshinagar area in Bengaluru late last night over an offensive Facebook post targeted at the minority community.

Over one thousand protesters vandalised the house of Congress MLA Srinivas Murthy, as the post was reportedly uploaded by his relative Naveen. The MLA and his family escaped unhurt.

At least two people died in the firing while another injured has been shifted to the hospital. Around 60 policemen including an ACP were injured in the violence. Several journalists covering the incident, were also injured.

145 people have been arrested in connection with the riots so far. Restrictions under Section 144 of CrPC have been imposed in Bengaluru & curfew has been imposed in DJ Halli & KG Halli police station limits of the city.

Meanwhile, Naveen has been arrested by the police, but claimed that his account was hacked and that he did not post anything.

Congress MLA Srinivas Murthy's house vandalised by angry mob over a Facebook post by his relative against minority community.

Sanjay Dutt diagnosed with Lung Cancer; to fly to US for Treatment