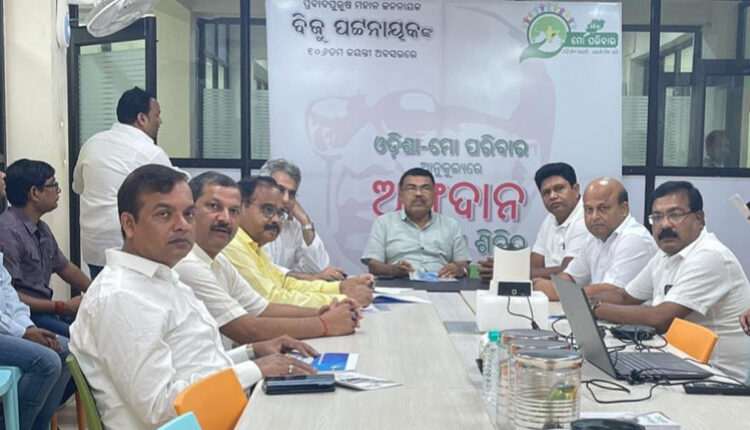 TNI Bureau: While the Odisha-Mo Parivar at its crucial review meeting, has decided to expand various activities including Jeevan Bindu-Blood Donation to Block and Gram Panchayat level, the most important among those is the decision to expand the help desk activities.

BJD’s Organisational Secretary Pranab Prakash Das, while appreciating the efforts of Convener Arup Patnaik and Odisha-Mo Parivar team, focused on the expansion of help desk activities to all leading hospitals of the state, district headquarter hospitals as well as the medical colleges.

The Help Desks set up by Odisha-Mo Parivar, currently operating at 12 hospitals in 9 districts, have proven to be a boon for people to get support whenever they are in distress.

It’s not easy for the common people (mostly illiterate and poor) to understand the complicated documentation process and the right point of contact at government hospitals. They always seek support from others to go through the right procedure. The OMP Help Desk Associates come to their rescue and guide them throughout so that they get the right treatment at the right time.

As told by Arup Patnaik, the Convenor of Odisha-Mo Parivar, he brought the idea of help desks at Government Hospital, from Mumbai. He has seen the sufferings of common people during his tenure as the Mumbai Police Commissioner. His Konark Cancer Foundation (KCF), has been working towards wiping the tears of people in distress.

After being chosen to head Odisha-Mo Parivar by CM Naveen Patnaik, Arup Patnaik found an opportunity to serve the poor and marginalised people in Odisha with a clear vision and focus on ‘seva’.

These Help Desks are going to be the real gamechanger in Odisha’s healthcare system, as patients from remote areas will get the right kind of guidance, which may help save their lives.

As many as two lakh units of blood have  been collected through Jeevan Bindu initiative over the last 20 months.