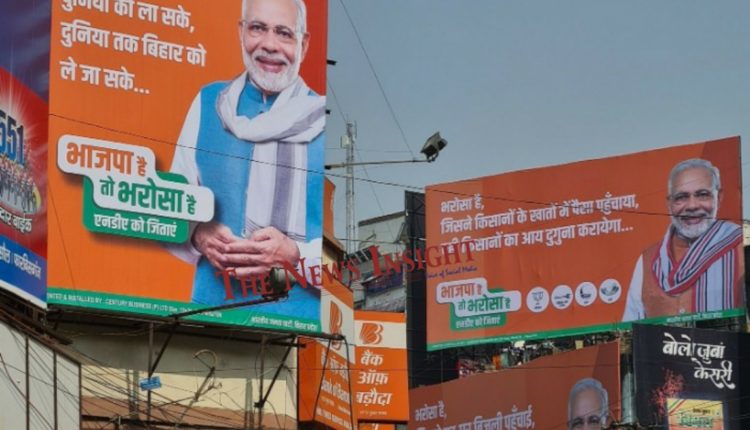 TNI Bureau: It’s happening in Bihar now. Things have changed in just a couple of years. BJP has gone on offensive in the elections, seeking votes invoking Narendra Modi’s leadership and its own development agenda. Nitish Kumar ceased to be the tallest leader in Bihar now.

Nitish Kumar is facing sharp criticism as well as attacks from Tejashwi Yadav (RJD) and Chirag Paswan (LJP). Nitish also carries the burden of massive anti-incumbency. BJP knows about the under-current against Nitish Kumar in Bihar although TV Channels show NDA is winning huge in the State.

BJP has now decided to bank on Narendra Modi’s popularity and remove Nitish as its “poster boy”. New posters across Bihar has only Modi and Modi as the leader. Nitish has been taken out of BJP posters. Except for the party symbols of NDA constituents, no other leader apart from Modi, finds a place in the posters.

Nitish Kumar looks and sounds rattled. He no longer remains sober and often loses his cool. He can see what’s happening to his political career and ambitions. He was the tallest leader of Bihar in 2014. But, BJP has not forgotten his vow to ensure ‘Sangh-mukt Bharat’.

The message is loud and clear. With all opinion polls predicting that BJP would emerge as the single-largest party in Bihar, Nitish Kumar will fast fade into oblivion. Even if BJP supports him as the CM today, tomorrow may be different. He will be forced out of power sooner than later. And, BJP will take the centrestage in Bihar Politics, may be with the help of Chirag Paswan, who would carry Ram Vilas Paswan’s Dalit legacy.