Ajit Mohan, the country head for Meta (formerly Facebook) in India, reportedly resigned from the company on November 3 with immediate effect 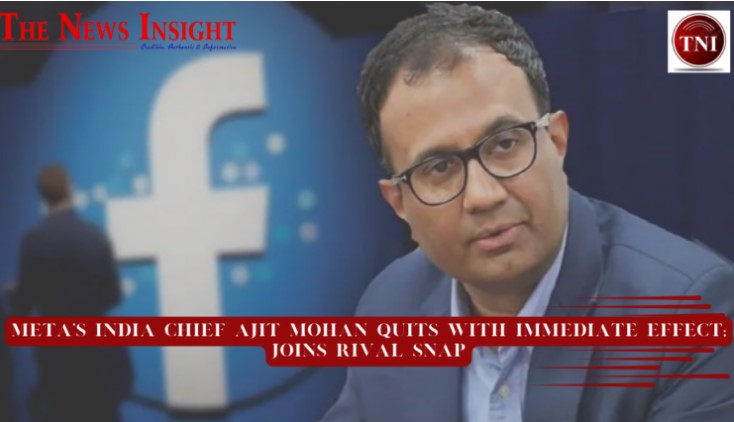 TNI Tech Bureau: Ajit Mohan, the country head for Meta (formerly Facebook) in India, reportedly resigned from the company on November 3 with immediate effect, according to persons familiar with the developments. The company informed news sources that this exit is confirmed.

The exit was sudden, according to individuals who spoke with News agency Money control, and the team is shocked. A source with knowledge of the issue said that Mohan is joining Snap, a rival. The snap.inc has not yet been confirmed.

Nicola Mendelsohn, Vice President, Global Business Group, Meta, says that Ajit has chosen to depart Meta in order to pursue an opportunity outside of the company.

According to a LinkedIn post by Mohan, his next job role will see him head for rival Snap, where he will oversee the social media company’s Asia Pacific region and be a member of the executive team.

“I am grateful to the firm for the amazing chance to lead its efforts in one of its most significant countries, and I am absolutely proud of the work the team and I have done to generate impact for people, artists, and businesses all around the country.”- Mohan said.

In January 2019, Ajit Mohan joined the social media giant as the managing director and vice-president for Facebook India, a newly created role by the internet giant in the nation. The vice-president position wasn’t held by Umang Bedi or Kirthiga Reddy, his predecessors.

In contrast to prior leaders who reported to Meta’s Asia Pacific office, Mohan was also the first India chief to directly report to the company’s headquarters in Menlo Park.

Under his direction, the parent company of Facebook has made a number of investments in India’s online ecosystem, including a $5.7 billion investment into Jio Platforms, the digital arm of Reliance Industries, and companies including social commerce platform Meesho and edtech business Unacademy.

“Over the past four years, he has played a key role in shaping and expanding our India operations so they can support millions of Indian customers, partners, and businesses. We are steadfastly dedicated to all of our work and relationships with India and have a strong leadership team in place to do so. We are very grateful for Ajit’s leadership and commitment, and we wish him nothing but the best in the future, ” he added.