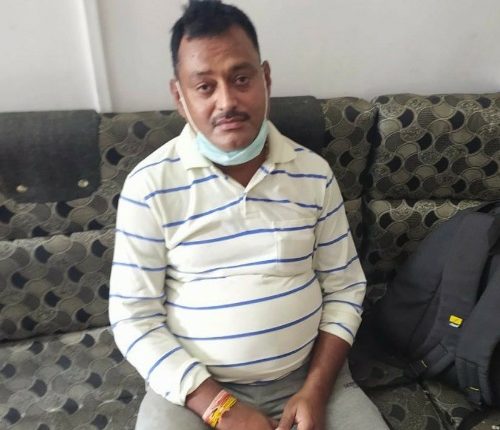 TNI Bureau: On the run for 7 days, Uttar Pradesh Gangster Vikas Dubey has finally been arrested from Ujjain, Madhya Pradesh. As per the reports, Vikas  had planned his surrender near the Mahakal Temple in Ujjain and shouted “I am Vikas Dubey, Arrest me”.  The arrest took place in media presence. So, it seems like Vikas had already called the mediapersons.

Vikas wanted to avoid a possible encounter by the UP Police who was baying for his blood. After being nabbed outside the Temple, Vikas was taken for questioning. He would be produced in court and then brought to Uttar Pradesh.

Vikas Dubey, had been on the run since the killing of 8 policemen in Bikru village near Kanpur. He led the team of 15 men who attacked the Cops on the intervening night of July 2 and 3. The Cops had launched a massive manhunt to nab him and his aides.

Several of his aides were either arrested or eliminated over the last few days. Earlier, today Prabhat Mishra alias Kartikeya and Praveen Dubey alias Bahua Dubey were killed by the police. Another accomplice of Vikas, Amar Dubey was killed yesterday. In total, 5 of his aides have been killed.

Vikas Dubey was last seen in Faridabad yesterday, but escaped on a tip-off from the insiders in police. The UP Police arrested former station in-charge of Chaubeypur police station Vinay Tiwari and Beat in-charge KK Sharma yesterday for helping Vikas Dubey.