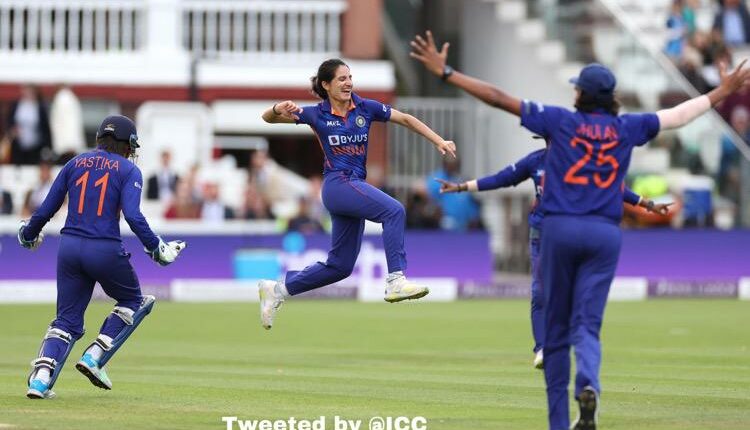 TNI Bureau: India sealed a famous ODI series win and ensured a clean sweep of 3-0 to give a perfect farewell to Jhulan Goswami. India defeated England by 16 runs in the 3rd ODI at the Lord’s Cricket Stadium.

Chasing a 170 goal, England had dropped to 103 for eight. However, Captain Amy Jones and Charlie Dean fielded a rear guard to frustrate the Indian bowlers. Jones was dismissed on the 28th by Renuka, who was the bowlers’ choice with four wickets to her name.

However, Dean threatened to take the game away from India before her controversial elimination on the 47th by Deepti Sharma. Earlier, England bundled India for 169 runs despite fifties from Smriti Mandhana and Deepti. Smriti scored 50 runs while Deepti was not out with 68.

Meanwhile, Jhulan Goswami was sent off for a first-ball duck in her last international. For England, Kate Cross returned figures of 4 for 26, while Freya Kemp and Sophie Ecclestone claimed two wickets apiece.

A LEGEND. AN INSPIRATION.

A remarkable 20-year career draws to a close!

The match at Lord’s, London gives the Harmanpreet-led side a unique opportunity to end a streak over England and bid a memorable farewell to Goswami, who has been India’s bowling spearhead for over a decade.

The Indian team won the first game by 7 wickets and the second game by 88 runs.