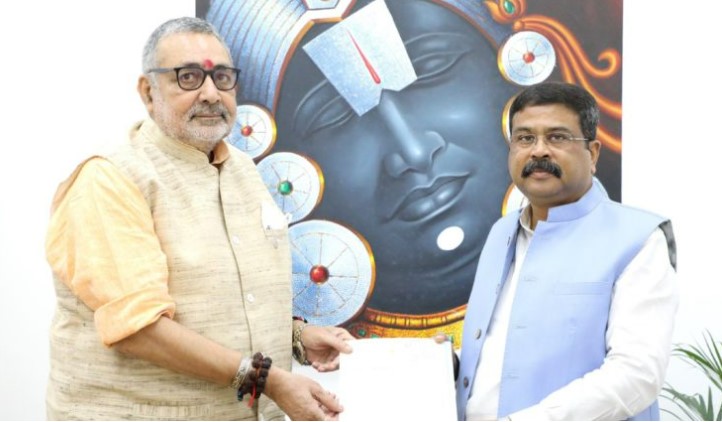 238
Share
Insight Bureau: Union Education Minister Dharmendra Pradhan today submitted a request to Rural Development Minister Giriraj Singh to allow Odisha Government to migrate data of eligible beneficiaries from rural housing window to Permanent Wait List of PMAY-G by opening the AWAS+ window to include eligible families in a transparent manner.
Dharmendra Pradhan in his tweet mentioned that the Rural Development Minister has assured him of every possible assistance towards ensuring that no poor and vulnerable in Odisha is left out from the dream of owning a pucca house.
In his letter to the departmental Minister, Pradhan mentioned that the Prime Minister Awabas Gramin has been planned under the leadership of Prime Minister Narendra Modi with the aim of providing proper housing to the poor, women, SCs, STs, OBCs, minorities and economically weaker sections of the country. The target of constructing 2.95 crore houses under this scheme has been extended till 2024 with an additional budget grant of Rs.1.25 lakh crore. Currently 1.9 crore houses have been built in the country. Similarly, in Odisha, about 27 lakh beneficiaries have been included in the Prime Minister’s Rural Housing Scheme.
Related Posts

He further stated that Odisha Government has claimed that a total of 6.65 lakh beneficiaries, including 5.09 lakh beneficiaries of the South West district, have been added to the State Rural Housing Portal. While the state government has included 5.5 lakh ineligible beneficiaries on the Awajan Plus platform during the phoney special window, the list of beneficiaries needs to be monitored.
The Union Minister Shri Pradhan mentioned in the letter that there is a need for comprehensive supervision to ensure that beneficiaries are not duplicated in the Prime Minister’s Rural Housing Scheme and the State’s own housing scheme.
The Centre had earlier rejected several requests from the State Government in this regard.
AWAS+ windowDharmendra PradhanGiriraj SinghOdishaPermanent Wait List of PMAY-GRural Housing Portal
238
Share FacebookTwitterWhatsApp