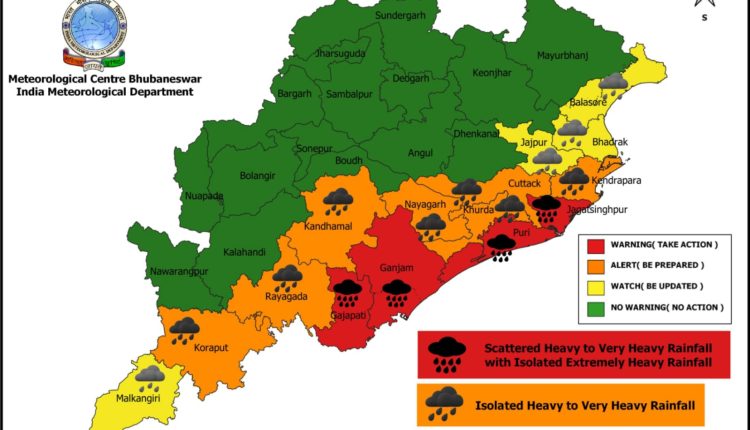 Insight Bureau: The India Meteorological Department (IMD) has warned of heavy rains along the coasts of Odisha, West Bengal and Andhra Pradesh in view of cyclone Jawad. According to the IMD, the cyclone is likely to hit coastal Odisha on December 4.

According to the forecast, a low pressure area now lies over south Thailand and its neighbourhood and is likely to emerge in the Andaman Sea during the next 12 hours.

Districts for which alert have been issued are: Gajapati, Ganjam, Puri, Khurda, Nayagarh, Jagatsinghpur, Kendrapara, Cuttack, Bhadrak, Balasore and Jajpur.

As per the IMD, wind speed may reach 90-100 kmph gusting to 110 kmph over northwest and adjoining west central Bay of Bengal from the morning of December 4 for the subsequent 24 hours.

Southern Odisha is likely witness heavy to very heavy rainfall and extremely heavy rainfall at several places on December 4 and later similar situation will be seen in the Northen region of the state, the weather department said.

Bhubaneswar-based Regional Meteorological Centre has advised fishermen out in the sea to return by December 2 morning. In neighbouring West Bengal fishermen have been warned not to venture into the sea from December 3 to 5.

Odisha Special Relief Commissioner P K Jena has asked the district collectors to monitor the situation closely keeping in view the IMD’s forecast of heavy to very heavy rainfall due to the cyclone.

IMD Director General Mrutunjay Mohapatra said the details like the landfall, wind speed and the expected rainfall will be known only after the low pressure turns into a depression on December 3. However, the cyclone is likely to impact the entire coastal region of the state.

The IMD’s bulletin stated, “It (cyclonic system) is likely to move west­northwestwards and concentrate into a depression by December 2 and further intensify into a cyclonic storm over Central Bay of Bengal during subsequent 24 hours. It likely to move northwestwards, intensify further and reach north Andhra Pradesh­-Odisha coasts by the morning of December 4, 2021.