All 55 BJP MLAs were part of the delegation. 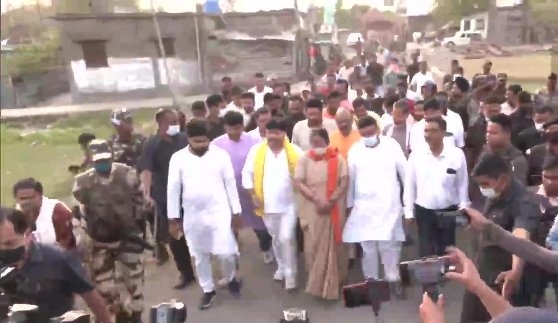 Insight Bureau:  A BJP delegation, led by leader of the opposition in the West Bengal Suvendu Adhikari visited Rampurhat in Birbhum district today where eight people were charred to death as nearly dozen houses were set ablaze yesterday, hours after the murder of Bhadu Sheikh, the TMC Panchayat leader.

However, the BJP delegation has been stopped from visiting the spot where 8 people were burnt alive in Bengal’s Birbhum district, claimed Suvendu Adhikari.

All 55 BJP MLAs were part of the delegation. BJP delegation demanded CBI/NIA investigation into the matter and called for President’s Rule in the State.

The Ministry of Home Affairs (MHA) on Tuesday sought a detailed report from the West Bengal Government over the Birbhum Massacre.