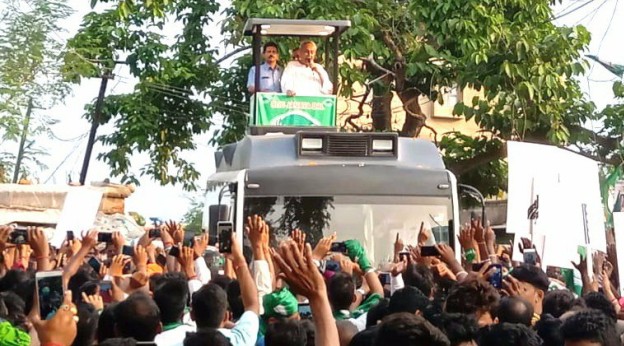 TNI Bureau: Many young people must be wondering why Naveen Patnaik is showing so much interest in a single assembly seat (Patkura) when he has 112 MLAs in his kitty. Well, this is nothing new. The sole aim of Naveen is to win each and every election and he leaves no stones unturned to achieve his goal.

However, Naveen Patnaik’s special interest in the subsequent bypolls post 2007, using heavy resources and manpower, has come to the fore in Laxmipur in 2008.

Naveen did everything possible in 2008 Laxmipur Bypoll to snatch the seat from Congress, but in vain. The entire BJD & Govt machinery failed against the sympathy wave created in favour of Purnachandra Majhi, son of deceased MLA Anantaram Majhi. Congress too had a strong base in the region in 2008, which helped them to a great extent.

When Bypolls were held in Umerkote in 2011 following the brutal murder of then MLA Jagabandhu Majhi, all Ministers and MLAs of BJD camped there. It was an unprecedented election with Naveen leading from the front and BJD leaders taking shelter even at the houses of unknown people. BJD won the Bypoll by a good margin.

Naveen showed the same enthusiasm and killer instinct in 2018 Bijepur Bypolls when he took charge of the battle and deployed all his resources to win it for Rita Sahu. More than the sympathy factor, Naveen’s determination and resolve to win the election, motivated his Team to go for the kill.

Whatever we see in Patkura, is just a continuous pattern. Whether Laxmipur, Umerkote, Bijepur or Patkura, the same modus operandi is being followed. It shows how BJD has become hungry to win elections under Naveen Patnaik, leaving the Opposition far behind. Yes, Bijoy Mohapatra has a herculean task in hand although he deserves to win the seat.