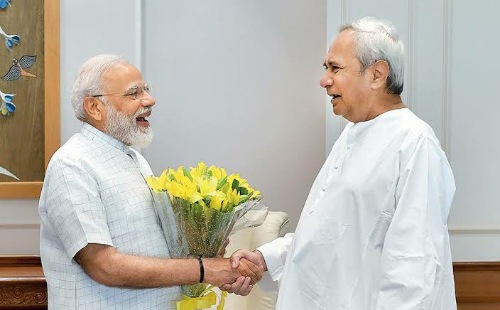 TNI Bureau: Odisha celebrates the birthday of its longest-serving Chief Minister Naveen Patnaik, who remains invincible for more than 20 years and became the tallest-ever leader in the State.

The BJD supremo, who has gained admiration and respect across the political spectrum, thanks to his clean image, humility and tremendous control over the party, is not celebrating Birthday this year in view of Corona Pandemic. He has appealed the people not to come to Naveen Niwas and instead help the people in need and donate blood and plasma to save lives.

Known for reaching out to the people on the ground with his pro-poor welfare schemes and sops for women, Naveen derives his strength from the support of poor and women. Even his bitter critics have given up saying as long as he remains at the helm of affairs, it’s almost impossible to make a dent in BJD’s poll prospects.

Naveen Patnaik, known as a Master of Poll Management, has two trusted lieutenants – Secretary to CM (5T) VK Pandian and Jajpur MLA Pranab Prakash Das who rule the roost in the party. Whenever the world talks about disaster management, Odisha and Naveen Patnaik are discussed in each forum. Naveen and his Team have also made all efforts to make Odisha the Sports Hub of India and received accolade from all quarters.

Hosting two Hockey World Cup events and sponsoring the National Hockey and Rugby Teams, is no less achievement. Naveen & Co. have successfully done that. List of his achievement is endless. At the same time, he has successfully thwarted all the storm and accusations.

Naveen Patnaik is unsparing when it comes to the people who lose his trust. Whether Bijoy Mohapatra or Baijayant ‘Jay’ Panda, they faced the worst after falling out with Naveen.

What’s next? Naveen is not worried about the succession debate. He focuses on the present and keeps doing his work. Armed with appreciations and certificates from the Centre (much to the chagrin of his critics), his stature keeps increasing every passing day. Undoubtedly, he remains the ‘Tallest Man’ in Odisha Politics.