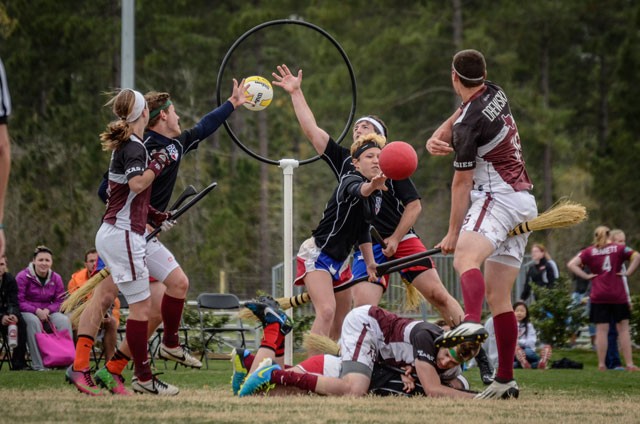 TNI Bureau: Growing up reading and watching Harry Potter, we have all wondered how it would feel to actually have Quidditch as a sport. The “muggle” world, as J.K. Rowling calls it, did come up with a way to actualize their dream of learning and playing Quidditch.

And it was in Oxford, July 2012, where the first Quidditch World Cup was held. No surprise that the United Kingdom was the birthplace of this fictional Harry Potter sport, being played in universities and towns across England, Scotland and beyond.

Quidditch in the Wizarding World of J.K. Rowling is played with two teams of seven players each, all flying on broomsticks. There are 3 chasers, who try to throw the Quaffle through one their opponent’s three hoops to score ten points for their team, and 1 keeper who guards the hoops. Then there are 2 beaters, whose focus is on the extraordinary ball the Bludger, whose purpose is to knock the opponents off course. And finally, in order to end the game, the seeker has to catch the Golden Snitch for an additional 150 points for their team.

However, in the real-world Quidditch is a bit different. Since we are born without magical powers, the seven players of a team need to run with a cumbersome broom between their legs, rather than flying it. The chasers play with volleyballs, throwing them through the opponent’s hoops for 10 points. The beaters play with dodge balls, throwing them at other opponents during the game. And then there is someone called a “snitch runner” (not a member of either teams, hence not on a broom), who has to run around with a tennis ball, aka the snitch, tucked into a sock in the back of their shorts. They need to avoid being caught by the seeker, because the game ends when the tennis ball snitch is caught awarding 30 points.

The International Quidditch Association held the first tournament where only 5 countries participated. But by 2018, there were 29 countries registering to play Quidditch. And exciting as it sounds, Quidditch is a fun but also competitive and rigorous sport.