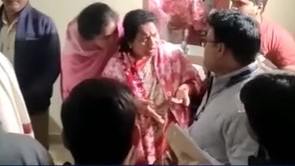 TNI Bureau: An FIR has been lodged against Sundargarh MLA Kusum Tete after a GST official on Tuesday filed a police complaint against the BJP legislator for obstructing a public servant from discharging duty at Paikmal in Bargarh district.

In the complaint, Jharsuguda State Tax Officer (CT and GST Enforcement Unit) Ashish Kumar Dash said that Kusum and her supporters attacked the officials during the GST raid on Jagdamba Cloth Store in Paikmal on Monday.

They managed to forcibly take away the seized documents and obstructed the work of GST officials on the pretext of buying cloth, the complaint stated.