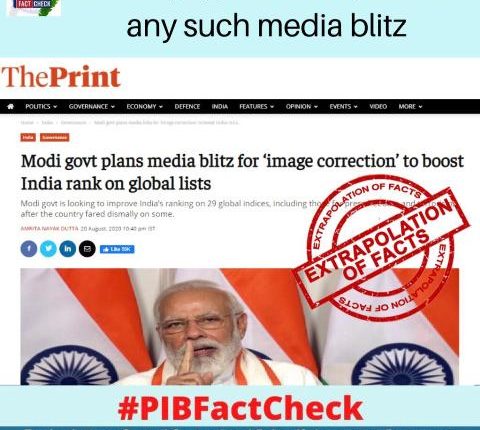 TNI Bureau:  There has been a huge uproar over an article in a leading News Portal which claimed that Modi Government is planning a massive media blitz to boost India’s rankings on 29 global indices.

The report further claimed that huge amount of money would be spent on this “image correction” exercise by the NITI Aayog that would be targeted at industry bodies, think-tanks, civil society organisations, research and survey agencies, and academic institutions.

Once the indices are out with improved rankings for India, there would be massive PR exercise to spread the word across the country and world through various platforms, it further claimed.

However, the PIB has rejected the claims. The PIB Fact Check has clarified that NITIAayog has not planned any such media blitz and that the claim is just an “extrapolation” of the discussion.

Claim: NITI Aayog is planning a media blitz to boost India’s rank on global indices for image correction. #PIBFactCheck: @NITIAayog has not planned any such media blitz. This claim is just an extrapolation of the discussion pic.twitter.com/JUUEHSlDUq