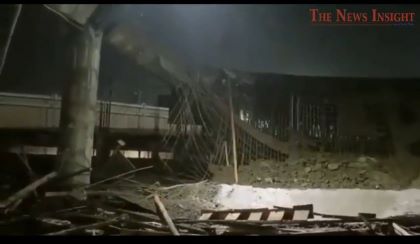 Breaking News! At least one worker killed and another one was injured, as an under construction link building between Terminal 1 and Terminal 2 of the Biju Patnaik International Airport, collapsed at around 10:30 PM.

15-20 workers were engaged in work when the incident took place. The worker, who was rescued from the debris, was declared ‘received dead’ by the Doctors at Capital Hospital, Bhubaneswar. He was identified as Antaryami Guru of Badamba area.

Fire Tenders, ODRAF, NDRF and CISF personnel have been engaged in the rescue operation. The injured Nabakishore Swain from Dhenkanal, is being treated at the Capital Hospital.

The link building between T-1 and T-2 was being built at a cost of Rs 87.21 crore. Foundation stone for the building was laid in February 2019.