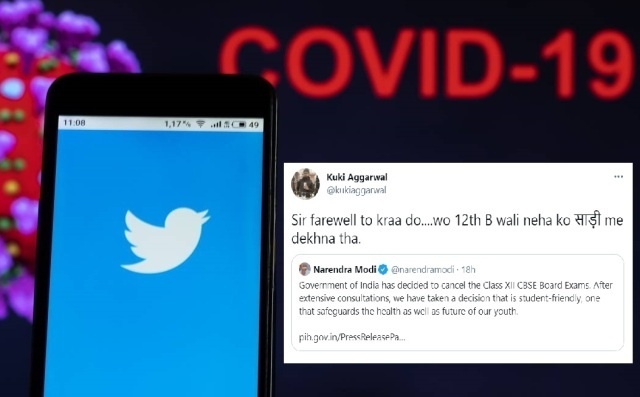 Due to the devastation caused by Corona, school and college students have been taking online classes since last year. These students also stepped up to the next class by taking the exam online. Because they have been at home for such a long period, most children miss their school, the joy of lunch break, and much more. Children who graduated during the Corona period were unable to partake in the farewell that is everyone’s desire.

While most students are relieved that the 12th CBSE Board Exams have been cancelled, these pupils are also disappointed that they were unable to attend the farewell ceremony. In most schools, a farewell party is held to say goodbye to students in the 12th grade. Many times, a dress code is enforced at this period. Girls frequently like to wear sarees at farewell parties.

In such circumstances, a youngster tagged Prime Minister Narendra Modi on Twitter and said he needed a goodbye because he wants to see a girl in a sari. Kuki Aggarwal tweeted, “Sir farewell to kraa do….wo 12th B wali neha ko me dekhna tha.”

The boy’s tweet has gone viral on social media. Many individuals voiced their disappointment at not receiving the farewell and requested that the party be held. People are not only sharing it with one another, but they are also commenting and reacting to it in various ways. He expressed sympathy for many individuals by saying that he shares their suffering.