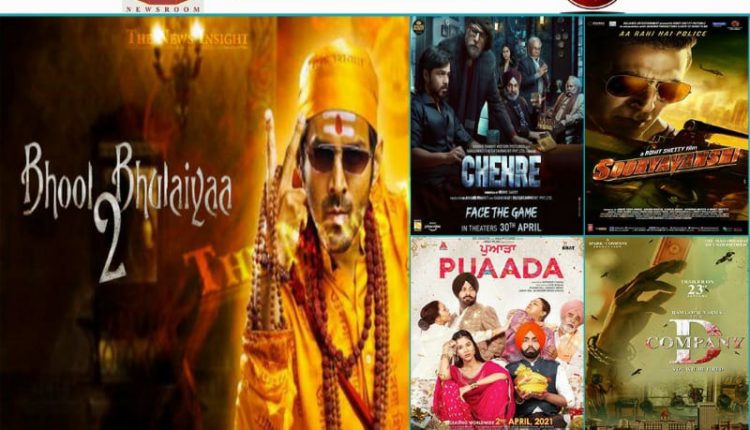 TNI Bureau: With regard to the recent development in the on-going pandemic, the film industry is being drastically impacted. The second wave of the Coronavirus has brought the release of many upcoming movies to a halt. And with actors and their respective crew members testing positive in the duration of shooting of many films, the release dates have been indefinitely postponed.

One such movie is Kartik Aaryan’s ‘Bhool Bhulaiyya 2’. The shooting for the same came to a halt when Aaryan was diagnosed with Covid-19. However, he has now tested negative for the virus.

Yash Raj Films’ Bunty Aur Babli 2 starring Rani Mukerji and Saif Ali Khan was supposed to hit the theatres on April 23, but now we expect a new release date. Even the Punjabi film Puaada, which was initially slated for April screening, has postponed their release for now.

Another April scheduled movie which has been most awaited by the fans since Diwali 2020, ‘Sooryavanshi’ starring Akshay Kumar and Katrina Kaif in lead roles, has also yet again put off their release.

Keeping the current scenario in mind, many people are unwilling to step out of their houses. And due to that fact, most filmmakers are choosing to postpone release.

Amitabh Bachchan-Emraan Hashmi starrer ‘Chehre’ which was scheduled to release on April 9 has also recently been delayed and no new date has been announced.

Further, the rising Covid cases have also postponed the release of Hindi version of ‘Haathi Mere Saathi’, starring Rana Daggubati. However the regional versions of the film, “Aranya” in Telugu and “Kaadan” in Tamil are available at the cinemas.

The Covid-19 norms in certain states where visitors need to carry a Covid negative test report before entering the malls, is also highly affecting the film industry.

The audience, now, has to hold their excitement and grab their seats while waiting for these movies to announce new release dates.

Vicky Kaushal-Katrina Kaif Wedding: All you need to know