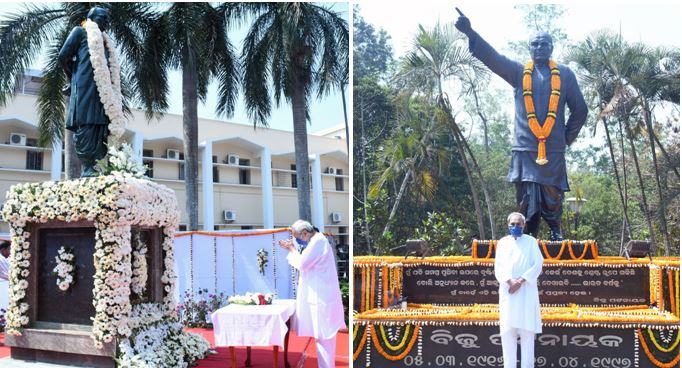 TNI Bureau:  “Biju Patnaik is a remarkable Indian whose adventures would fill a book”. This statement of Sir Julian Huxley, the First Director General of UNESCO certifies that Odisha’s Ex-Chief Minister Bijayanand Patnaik was the Iron man of Odisha. People of Odisha and many across the country paid rich tribute to the legend Biju Babu on his 105th Birth Anniversary today on March 5, 2021.

Biju Patnaik’s achievements are no less than the daring stories of the Knights. Biju Patnaik’s courage was witnessed by the whole world during the Indonesia episode in 1947. Again, his successful evacuation of the British families in Rangoon was all praised by the then British Government.

Biju Patnaik had also proved himself as a dominant national leader in Indian politics. In Odisha, he was perhaps the strongest political leader who ruled the state for two terms as Chief Minister and now his son Naveen Patnaik is also ruling for his third term. Although Biju Pattanaik is not alive today, his name has become immortal and the major political party in Odisha is also named after him – the Biju Janata Dal (BJD).

In 1966 When the Central government refused to give funds to build the Paradeep port, Biju Patnaik stated, “to hell with the Govt. I will build the port with state government and my own money”. He spent Rs 1.60 billion on it. Later, of course, Nehru sanctioned funds for the project. Today that is Orissa’s most important port.

The Encyclopedia Britannica described Biju Patnaik as “Indian Politician; who parlayed his fame as a World War-II aviator, anti-British freedom fighter and commercial airline entrepreneur into a political career, notably as Chief Minister of Orissa State, 1961-63 and 1990-95”. Biju Patnaik was a real life hero and his daring achievements epithets him the ‘Iron man of Odisha’ in true sense.

Tributes to Biju Babu on his birth anniversary. His futuristic vision for India, emphasis on human empowerment as well as social justice inspires us all. The nation is proud of his efforts for Odisha’s progress.

My humble tribute to the son of the soil, #BijuBabu on his birth anniversary. #BijuBabuTheLegend pic.twitter.com/OTva7AG9Ox

Paying rich tributes to the Legend on his Birth Anniversary today.

His ideals, principles and developmental initiatives will continue to inspire millions. #BijuBabu did not just belong to #Odisha . He was a National Icon. #BijuJayanti pic.twitter.com/vpdIzFBwbH

Here are some facts about the Legend although there are many more to recall. #BijuJayanti #BijuBirthAnniversary pic.twitter.com/2BDkFjUXQK

#OdishaMoParivar pays humble tributes to Late Shri Biju Babu, the daredevil pilot, freedom fighter and a great human being who inspired millions across the globe, on his 105th Birth Anniversary.

While the Nation remains indebted to him, #Odisha is proud of his achievements. pic.twitter.com/d1UxtNpGC3