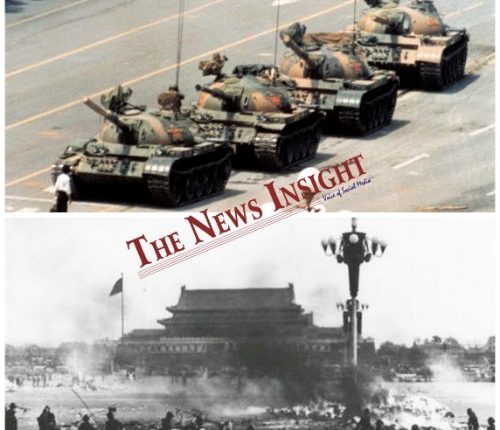 By Sharmishtha Sahu: This year, marks the 31st anniversary of the disreputable and horrific 1989 Tiananmen Square Protests also known as June Fourth incident or the 89’ Democracy Movement.

The death of a pro-reform Communist Party leader, Hu Yaobang, ignited the protests among the already oppressed citizens of China who wanted a radical change in their governance.

These protestors campaigning for free Press, free speech and democracy in China consisted of mainly college students and young people. Gathered at Tiananmen Square, they never could have anticipated what came next to their peaceful demonstration. The Chinese Government sent several tanks and ordered the military to mercilessly open fire on unarmed citizens to “clear the crowd”.

Till date the actual records and casualties of the brutal massacre have not been disclosed by the government. The CCP reports a mere death count of over 2000 people, but those who live to tell the tale, claim that tens of thousands of people were martyred for the cause.

For over 30 years, the CCP has been trying its best to obliterate the incident from the pages of history but they surely cannot wipe out the memories of the people who witnessed the incident first hand. What began as a pro-democracy protest is now known being termed as “counter – revolutionary riot” by the government.

Observing the ongoing happenings in Hong Kong, a question arises in my mind – Is history repeating itself? Will dissent rise over oppression or be crushed by the corrupt vision of communism and dictatorship?