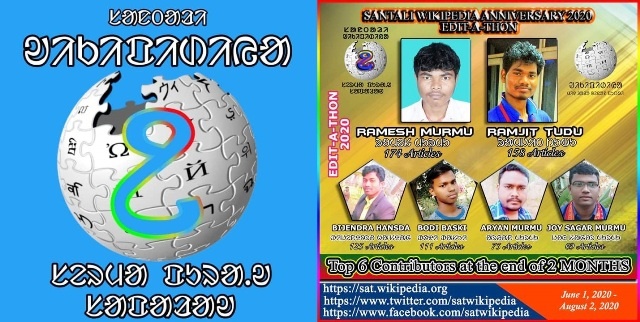 TNI Bureau:  Twenty Santali Wikipedia users from across India, Nepal, and Bangladesh contributed 865 articles in the language during a two-month online edit-a-thon, which was organised to mark the two years of the community.

Amid the Covid-19 pandemic, the community tried to engage itself to increase the content in Santali, one of India’s 22 scheduled languages.

It is not only the first tribal language Wikipedia in India but also one of the fastest-growing Wikipedia communities, growing 198 per cent year on year after Silesian Wikipedia (562.11 per cent) and Egyptian Arabic Wikipedia (398.45 per cent).

“Congratulations to the Santali Wikipedia community on their 2nd anniversary and for their brilliant edit-a-thon,” tweeted Jimmy Wales, founder of Wikipedia.

CEO Katherine Maher also wished the first indigenous language Wikipedia from South Asia on its successful journey. “Wikimedians from India, Bangladesh, and Nepal have collaborated to create more than 4,220 articles in the Santali language,” she tweeted.

During the edit-a-thon that ended on the community’s second birthday on August 2, Ramesh Murmu from Jharkhand contributed the highest article of 174, followed by Ramjit Tudu and Aryan Murmu from Odisha, Bijendra Hansdah from Jharkhand, and Bodi Baski from West Bengal. While Albetus Tudu and Shibu Murmu were the top contributors from Bangladesh and Nepal, Odisha’s Maina Tudu wrote the highest articles among female contributors.

Over the past two years, the community has conducted workshops and outreach programmes to promote and aware the readers about the Santali language.

Santali, mainly oral language until the development of Ol Chiki by Pandit Raghunath Murmu in 1925, is spoken by 7.6 million people, according to the 2011 Census, in India alone. Its speakers live mostly in Jharkhand, West Bengal, Odisha and Assam. It is also spoken in Bangladesh and Nepal.