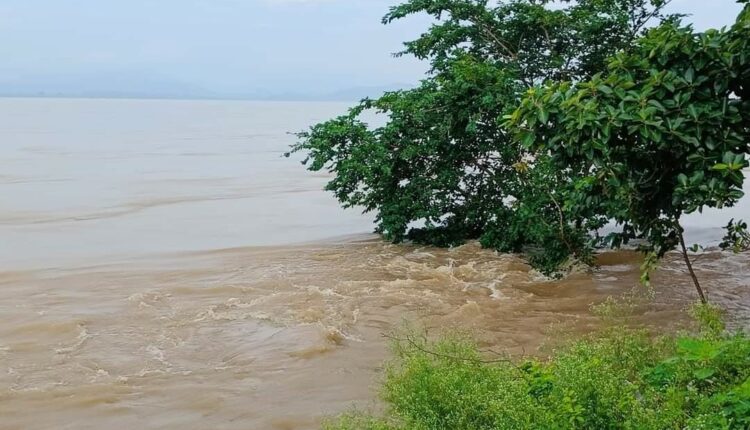 Insight Bureau: With back-to-back low pressure systems in Bay of Bengal triggering rain havoc, the flood situation is turning grim in several areas in Odisha due to the rising water levels in the Mahanadi river basin.

The flood situation in Odisha will touch peak level in 3 hours, informed the Engineer-in-Chief of Water Resources department. Jagatsinghpur and Puri districts are at high risk due to flooding in Mahanadi.

🔹Jagatsinghpur and Puri districts are at high risk due to flooding in Mahanadi.

🔹The water level in Hirakud Dam stands at 625.04 ft. Currently, the floodwaters being discharged through 26 sluice gates in Hirakud.

🔹Mahanadi river breached the danger level near Naraj in Cuttack district; water flowing at 26.68m near Naraj as against the danger mark of 26.41m.

🔹Water level crossed the danger mark of 97.25 feet at Mundali in Cuttack; water flow at Mundali calculated around 11.6 lakh cusec. Several villages in Athagarh area of have been marooned.

🔹Water level in Debi river at 5.5 metre crossed the danger mark of 4.93 metre near Kakatpur Bauriakan.

According to the India Meteorological Department, a new low pressure is likely to form over north-west Bay of Bengal (BoB) around August 19.