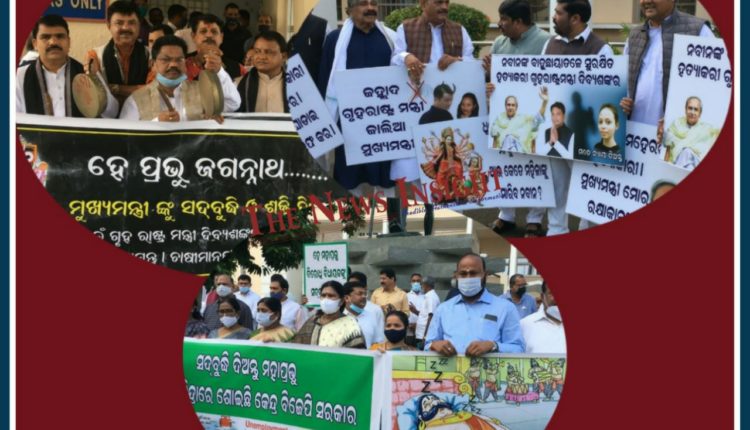 Insight bureau: Both Opposition BJP and Congress rushed into the well of the assembly, soon after proceedings began and gheraoed the podium of Speaker Surjya Narayan Patro demanding dismissal of Dibya Shankar Mishra, the Minister of State for Home.

Congress MLAs held placards seeking CM’s intervention in Mamita Meher murder case and demanded resignation of MoS (Home) Dibya Shankar Mishra. BJP MLAs prayed to Mahaprabhu Jagannatha to give good sense to the CM so that he wakes up from the deep slumber.

On the other hand, the ruling BJD members sprinkled Gangajal to counter the opposition. They sprinkled the holy water on the BJP and Congress members hoping that good sense may prevail upon them.

“The drama by Opposition is for vested interests. Why did they create ruckus after adjournment notice was accepted. Let good sense prevail among the Opposition MLAs, that is why we sprinkled Gangajal in the House” said BJD MLA Pratap Deb.

As the ruckus continued, Speaker SN Patro adjourned the House till 4PM.