However, due to Gandhi’s fame, his ashes were split up, some given to friends and family, and some sent all over India for use in ceremonies. 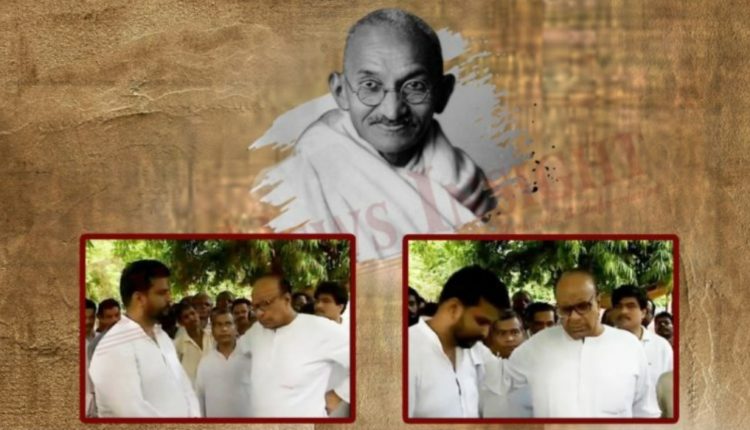 Insight Bureau: When Mahatma Gandhi was assassinated, his body was cremated. However, the ashes were not all immersed in water as dictated by Hindu tradition. However, due to Gandhi’s fame, his ashes were split up, some given to friends and family, and some sent all over India for use in ceremonies.

In the 90s, suddenly a storm arose in the country. It was discovered that the ashes of Mahatma Gandhi were kept hidden in a bank locker (SBI) in Odisha. For 40 years,  it was lying in a wooden box. When some newspapers of Odisha published this news, questions arose as to who did this. The role of the Odisha State Government itself came under question in this whole matter. Later this matter caught so much intensity that it reached the Supreme Court. Then the bench of the then Chief Justice Ahmadi gave its verdict. But the one person that helped the great grandson of Bapu was Late Biju Patnaik. Let us throw some light to the entire incident and Biju Babu’s role.

This is in the middle of the 90s. Suddenly, the insiders of the State Bank of India leaked information to the local media that the ashes of Mahatma Gandhi were kept hidden in a locker in their bank for the last 40 years. As soon as the newspapers of Odisha published the news, there were strong reactions to it. No one understood why this happened. After all, who did this and what is his motive behind doing this.

After this, there were so many ups and downs in this matter that this whole incident first turned into a mystery and then it put the state government of Odisha in the dock. Some organizations also raised questions that these ashes are not of Mahatma Gandhi but of Subhash Chandra Bose. so were kept hidden in the bank.

Gandhiji’s great-grandson Tushar Arun Gandhi wrote a letter to the Chief Minister of Odisha, Governor and Chairman of State Bank of India in 1996 demanding an inquiry into this. In the letter, he wrote that he has come to know about it from some press reports.

He wrote, “If it is indeed true that the ashes of Gandhiji are kept in the locker of the State Bank of India in Cuttack, then it is very sad, because according to Hindu beliefs, the soul of a dead person does not get peace until His ashes are not thrown into rivers.” He requested in the letter that if anything is known about this, then he should be informed.

Earlier in December 1994, the bank had also written a letter to the Chief Minister of Odisha asking him to withdraw this safe deposit but he did not get any reply on this. Since this box was deposited by the Odisha government, they also had to decide what to do with this wooden box.

After receiving the letter from the bank, Tushar again addressed the then Chief Minister of Odisha, JB Patnaik and Governor G. Another letter was sent to Ramanujam. Along with this, he also sent a letter to the Chief Secretary of the state that he should be helped in getting the ashes of Gandhiji so that his last rituals can be completed according to Hindu religion. This time also he did not get any reply to his letter.

After this, the Secretary to the Government of Odisha wrote a letter to the General Manager (Operations) of State Bank of India, Bhubaneswar on 23 March 1996, saying, “The State Government does not take responsibility for the box lying in this locker, in which the ashes of Mahatma Gandhi are told, therefore The bank is free to do anything with this box.

In such a situation, Tushar Gandhi appealed by sending a letter to the then Chief Justice of the Supreme Court, Aziz Aloe Ahmadi, on 26 May 1996. Which the Supreme Court heard as a PIL. Several weeks later, the decision came that the box of Mahatma Gandhi’s ashes present in the locker of the State Bank of India in Odisha should be given to Gandhi’s great-grandson.

Tushar found the ashes kept in a wooden box. Then he went to Allahabad (now Prayagaraj) on 30 January 1997, where he immersed it at the Sangam.

Those memories were brought alive again by Cyber Security Expert Prashant Sahoo who tweeted a video where a famous personality was seen with Tushar Gandhi while he was on a Satyagraha to get the ashes back. He was none other than Biju Patnaik.

The day Bapuji’s ashes were released from SBI locker, legendary Biju Patnaik was seen standing with him and waiting for the box to be released. This whole incident made his fans as well as critics believe that Biju Babu always believed in delivering justice.

Never Seen Before Footage
of #Satyagraha of #TusharGandhi,the great-grandson of #Bapuji to release the ashes of #MahatmaGandhi from SBI Cuttack locker- year 1996. #BijuBabu helped him and by SC order,he immersed the ashes at Triveni Sangam on 30-1-1997. @TusharG @CMO_Odisha pic.twitter.com/uPMIdtsQOt

Replying to the question of a media, Biju Babu expressed his support for Tushar saying, “what he is saying is a right thing.”