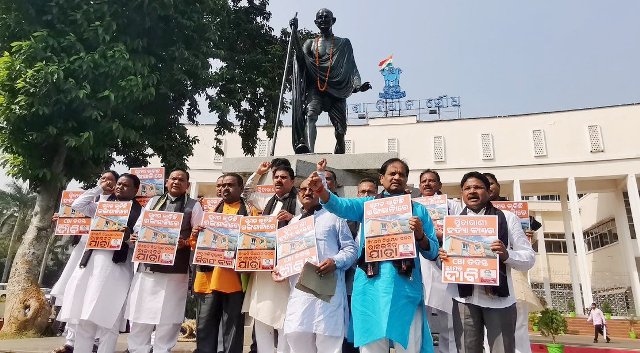 TNI Bureau: The Odisha BJP has intensified its protests over the ‘mysterious death’ of Lady PEO Smitarani Biswal in Haridaspur of Jajpur district, seeking a CBI probe into the matter.

BJP MLAs led by LoP Pradipta Kumar Naik boycotted the Assembly and continued their demonstration near the Gandhi Statue inside the Assembly premises.

“The BJD Government has killed democracy by running the House without the main Opposition party. The move to suppress BJP’s voice in the House, is linked to BJD’s intent not to allow a CBI probe into Smitarani death case. Speaker has broken the assembly traditions by allowing the Congress to bring a motion on Smitarani Biswal death case, in stead of main opposition party,” said Pradipta Naik.

“No postmortem report confirms suicide. Smitarani’s autopsy report says her death was caused by asphyxia. How did the Minister conclude that it was a suicide and not a murder”, he asked while demanding the dismissal of Jajpur SP Chairperson of Women Commission as well as a CBI probe into the case.