Claims amounting to more than Rs 1000 crores are not settled by insurance companies under PMFBY, said BJD MP Sasmit Patra. 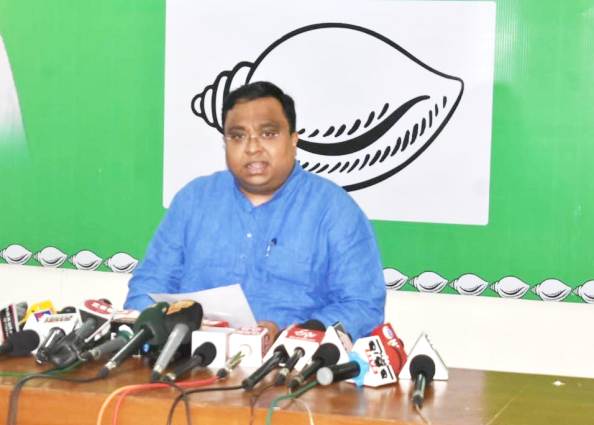 TNI Bureau:   Spokesperson of the Biju Janata Dal (BJD), Sasmit Patra on Monday said lakhs of farmers in Odisha are suffering due to non-settlement of claims under the Pradhan Mantri Fasal BimaYojana (PMFBY).

Claims amounting to more than Rs 1000 crores are not settled by insurance companies under PMFBY, said BJD MP Sasmit Patra.

➡️ Sasmit Patra said that lakhs of Odisha farmers are affected by the PMFBY across Bargarh, Sambalpur, Sonepur, Deogarh, Bolangir, Nuapada and Kalahandi districts of Odisha.

➡️ Over the past five years, Rs 1.26 lakh crores have been paid as crop insurance premium across India and Rs 87,320 crore was received as claims. The insurance companies made Rs. 40,000 crores of PMFBY money, affecting the interests of the farmers, he said.

➡️ In Odisha, the Odisha Government has paid Rs. 3250.48 crores so far and Odisha farmers have paid Rs. 1009.84 crores to the insurance companies so far. Adding the Centre’s share, the total payment is Rs. 7510.8 crores till Kharif 2021, the BJD spokesperson said.

➡️ “It is high time that the Union Government rectifies these issues and helps the farmers in times of distress. It should use new technological innovations such as drones to clear assessment of claims expeditiously and allow only Government insurance companies to undertake PMFBY in order to safeguard the interests of the farmers,” said Patra.

➡️ He further said that BJD MPs have repeatedly taken this up in both Houses of Parliament. We will continue to fight for our farmers till their claims are settled.

The Incredible Journey of Shaili Singh