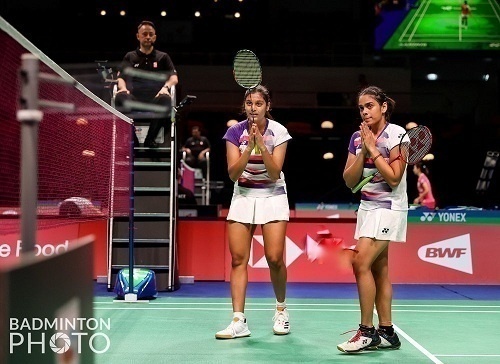 Insight Bureau: India defeated Spain by 3-2 in their opening Group B encounter of the ongoing Uber Cup Badminton at the Ceres Arena in Aarhus on Sunday.

In the opening clash of the tie, India’s leading women’s singles player at the Uber Cup, Saina Nehwal was forced to retire against Spain’s Clara Azurmendi when she felt a sudden pain in her groin. Before retiring from the match, the Indian narrowly lost the opening game 20-22 to the World No. 58 Azurmendi. With that, Saina was then unable to continue the second game.

For the second match of the tie, Malvika Bansod propelled India towards a fightback as the 20-year-old got the better of World No. 71 Beatriz Corrales in straight games. The left-handed Indian shuttler overwhelmed Spaniard by 21-13, 21-15.

In the third match, doubles pair Tanisha Crasto and Rutaparna Panda edged India ahead when they defeated Paula Lopez and Lorena Usle 21-10, 21-8.

In the second doubles match of the tie, Ashwini Ponnappa and Sikki Reddy lost to Clara Azurmendi and Beatriz Corrales by 18-21, 21-14, 17-21.