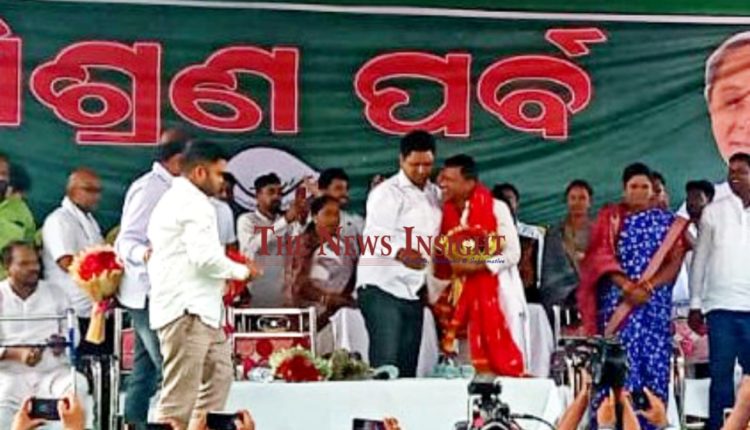 Insight Bureau:  Former Congress leader Pradeep Majhi, who had resigned from the party a few days ago, has joined BJD along with thousands of supporters. BJD’s Organisation Secretary & Jajpur MLA Pranab Prakash Das as well as Odisha Ministers Tushar Kanti Behera and Padmini Dian attended the Mishrana Parba in Nabarangpur.

Nabarangpur MP and District BJD President Ramesh Chandra Majhi was present at the occasion. The entire event was coordinated under his guidance. “Only CM Naveen Patnaik can develop undivided Koraput district. That’s the reason why I joined BJD to strengthen his hands further,” said Pradeep.

Many Congress leaders and workers had already resigned from the party while pledging support to Pradeep Majhi. They joined the BJD officially today.

Pradeep Majhi, who had taken a different line from his father former Rajya Sabha MP Bhagaban Majhi (then BJD President in Nabarangpur) and started his career from Congress, rose to the top from Zilla Parishad Chairperson to Odisha Youth Congress President to Nabarangpur Lok Sabha MP. He was later appointed the Working President of the Congress.

He resigned from the primary membership of the Congress after seeing no hopes to serve the people. It’s believed that he would sent to Rajya Sabha next year.

Pradeep had defeated Domburu Majhi of the BJD in 2009 elections to become the Lok Sabha MP for the first time.