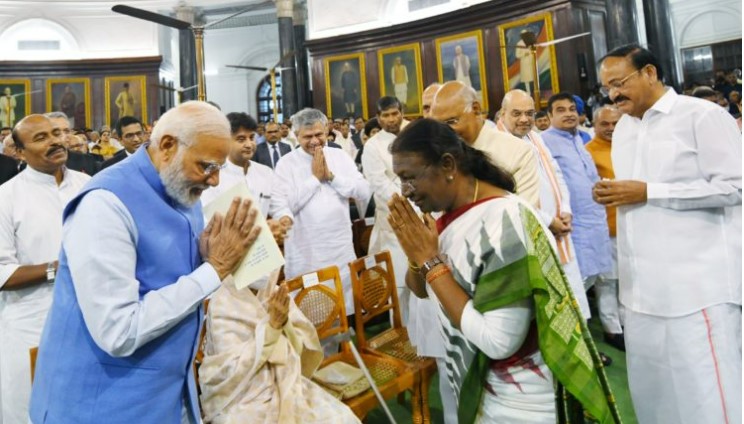 Insight Bureau: Born in a tribal family based in a remote village of Mayurbhanj, Draupadi Murmu started her political journey with the Bharatiya Janata Party (BJP) way back in 1997.

➡️Draupadi Murmu joined the BJP in 1997 and was elected as the councilor of the Rairangpur Nagar Panchayat.

➡️In 2000, she became the Chairperson of Rairangpur Nagar Panchayat and also served as the National Vice-President of BJP Scheduled Tribes Morcha before being elected twice to Odisha State Legislative Assembly on BJP ticket.

➡️Murmu also served as a Council of Minister in the BJP and BJD coalition Government in Odisha.

➡️A legislator from Rairangpur assembly constituency in the years 2000 and 2004, she was conferred Nilkhantha Award for the best MLA by the Odisha Assembly in 2007.

➡️ In 2014 Assembly Elections, Droupadi Murmu fought well in Rairangpur Constituency and lost by 6000+ votes to Saiba Sushil Kumar Hansdah of the BJD.

➡️In June 2022, Draupadi Murmu was nominated by BJPs the National Democratic Alliance’s candidate for the President of India for 2022 election and on on July 25, 2022, took oath as the 15th President of India.

During her political journey, she faced several ups and downs in her life. Her husband Shyam Charan Murmu, a banker, died in 2014. She also lost both of her sons all in a span of just 4 years.

Murmu has rich administrative experience. She has made a special identity in public life by serving the public for a long time as a public representative.