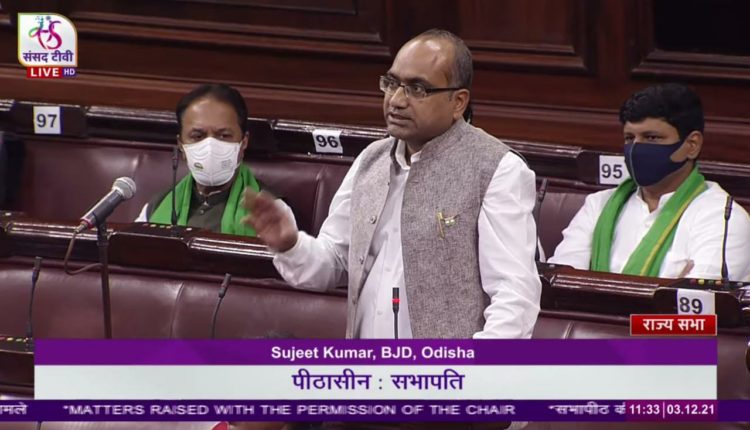 Insight Bureau: Rajya Sabha MP from Odisha, Sujeet Kumar on Friday raised the issue of poor mobile network and internet connectivity in the tribal-dominated undivided KBK region of Odisha. In the Zero Hour of Rajya Sabha, he brought into the attention of the house about the lack of mobile network and internet connectivity hampering the progress of the tribal people in the region.

Setting the context in the House, Kumar said that KBK region is a cluster of 8 tribal districts in Odisha in which 7 out of the 8 districts are part of the Aspirational Districts initiative of Niti Aayog.

He cited the Annual Report 2020-21 of Department of Telecommunications of Government of India which mentions about the tele-density of Odisha being at 76.28 % against the National average of 86.55% and the rural tele-density of Odisha being even worse at 62.37 % as per the same survey. He further said that there are 310 Gram Panchayats in Kalahandi District of which 81 Gram Panchayats don’t have internet connectivity.

Bringing focus back on the state, Kumar said that there are 6278 villages in Odisha without any mobile access or connectivity, the largest number in the country. He said that as per one survey, nearly 2500 mobile base stations will be required to provide coverage to all the uncovered villages in the State. He further said that recently Union Home Ministry sanctioned 488 number of mobile towers to Odisha, but to provide coverage to all uncovered villages, an estimated 2000 more mobile base-stations will be required.

He mentioned about how Telecom Service Providers are unwilling to put up requisite telecom infrastructure in villages of undivided KBK Districts which are largely tribal dominated and LWE affected.

Further, he put forward a case about how BSNL came up with a notification on 28th July 2020, to discontinue its 4G services and infrastructure in Kalahandi citing revenue losses and commercial non-viability. Kumar raised the same issue in the previous sessions of the Parliament. The notification was later withdrawn.

Kumar later said that poor internet connectivity affects all the government schemes and largely the education sector particularly in the year when NEP is being rolled out. He said that COVID-19 pandemic has hit the education sector badly and children depend on internet connectivity to continue their online education. With the apathetic attitude of the Telecom Service Providers, tribal children are getting affected the most, Kumar said.

Kumar urged the Central Government to take adequate and urgent steps to provide mobile and internet connectivity in all uncovered villages of the undivided KBK region.