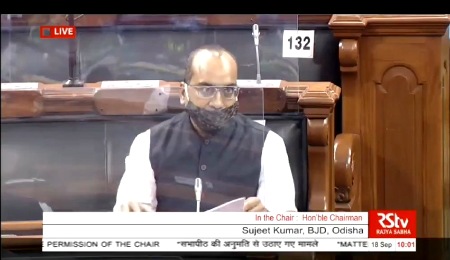 TNI Bureau: BJD MP in Rajya Sabha, Sujeet Kumar has raised the issue of BSNL 4G service in undivided Kalahandi district, opposing the move to shift the services to another district.

While raising the issue during the Zero Hour in Parliament, Sujeet Kumar wondered how the ‘Digital India’ campaign would succeed if BSNL takes a retrograde step of shutting down its 4G services in Kalahandi and Nuapada district.

He also drew attention to the fact that women would be badly affected by such a move, as they have been digitally empowered under the ‘Mission Shakti’ initiative of Odisha Government. “The BSNL’s move would derail the women empowerment process,” he added.

Earlier, Sujeet had written a letter to Union Minister Ravi Shankar Prasad in July 2020 seeking his personal intervention to dissuade BSNL from arbitrarily shutting down its 4G services in Kalahandi and Nuapada districts.