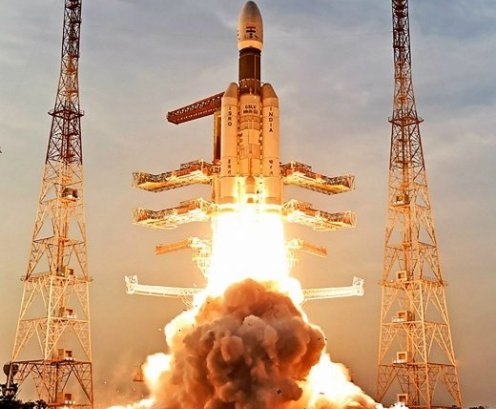 The Chandrayaan-2 was scheduled to be launched on July 15. However, less than an hour before the launch, the mission was called off after a technical snag was detected.

India’s second moon mission’s success will make India the fourth country after the US, Russia and China to pull off a soft landing on the moon.

ISRO Chairman K Sivan told they were “doubly confident” about Chandrayaan 2 launch this time. This is the 73rd launch mission from Sriharikota Space Centre.

• At 16.2 minutes, L-110 ignites and the S200 rockets separate from the main rocket, 181.6 km above Earth
• Day 48: Lander ‘Vikram’ to land on Moon and deploy a six-wheeled Rover, Pragyaan on the Moon to carry out several scientific experiments
• The soft landing of the Vikram lander on the Moon’s surface is likely to be on September 6, 2019
• India 4th to land rover on Moon but 1st to land near south pole – the dark side of the Moon
• The average distance of Moon from Earth is 3, 84, 000 km
• Chandrayaan-2 is first Indian expedition to attempt a soft landing on the lunar surface with home-grown technology

‘Super 30’ to expand its base in Odisha soon: Anand Kumar