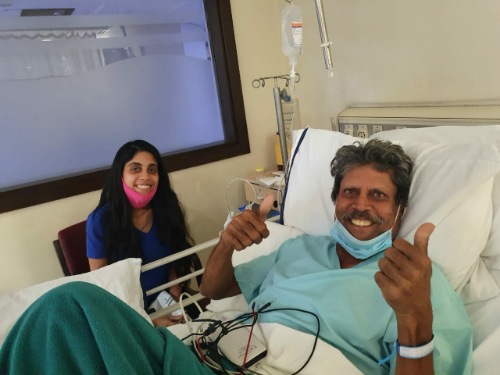 Kapil’s ex-colleague Chetan Sharma posted a pic late last night where Kapil was seen smiling and making a victory pose with his daughter Amya by his side.

He is under close supervision of Dr. Atul Mathur and his team. He is expected to get discharged in a couple of days.

Angioplasty is a procedure to open blocked arteries and restore normal blood flow to the heart.

Kapil Dev, who was inducted into the International Cricket Council’s Hall of Fame in 2010, played 131 Tests and took 434 wickets. He also scored 5,248 runs with 8 hundreds and 27 fifties.

Kapil played 225 ODIs and took 253 wickets. He scored 3,783 runs with 1 hundred and 14 fifties. His 175* against Zimbabwe in 1983 World Cup is considered as one of the greatest knocks in ODI history. Unfortunately, that match was not recorded as BBC team was on strike that day.

Kapil Dev was named by Wisden as the Indian Cricketer of the Century in 2002.