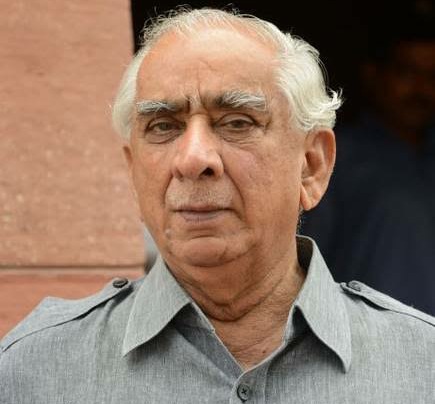 TNI Bureau: Former Union Minister Jaswant Singh, who played a crucial role in governance during the tenure of late Atal Bihari Vajpayee, passed away following a prolonged illness. He was 82.

“Deeply pained by the passing away of veteran BJP leader & former Minister, Shri Jaswant Singh ji. He served the nation in several capacities including the charge of Raksha Mantri. He distinguished himself as an effective Minister and Parliamentarian,” Rajnath tweeted.

“Shri Jaswant Singh ji would be remembered for his intellectual capabilities and a stellar record in service to the nation. He also played a key role in strengthening the BJP in Rajasthan. Condolences to his family and supporters in this sad hour. Om Shanti,” he added.

“Jaswant Singh Ji served our nation diligently, first as a soldier and later during his long association with politics. During Atal Ji’s Government, he handled crucial portfolios and left a strong mark in the worlds of finance, defence and external affairs. Saddened by his demise,” tweeted the PM.

“Jaswant Singh Ji will be remembered for his unique perspective on matters of politics and society. He also contributed to the strengthening of the BJP. I will always remember our interactions. Condolences to his family and supporters. Om Shanti”, he added.

Jaswant Singh was a retired Army Officer. He was one of the founding members of the Bharatiya Janata Party (BJP). He held key portfolios such as Finance, Defence and External Affairs in Atal Bihari Vajpayee’s Cabinet.

However, he was sacked from the BJP in 2009 over his praise for MA Jinnah in his book. The book also held Sardar Patel responsible for the partition which was against the core ideology of RSS/BJP.

Jaswant rejoined the BJP in 2010, but was expelled again in 2014 for standing as an Independent candidate from his Constituency Barmer. Singh was upset that a former Congress leader Sona Ram Choudhary was fieled from Barmer on BJP ticket.

His son Manvendra Singh, was a Colonel in the Indian Territorial Army and fought in the Kargil War. He also served as a Journalist before joining politics. He was elected to Lok Sabha in 2004 on a BJP ticket. He joined the Congress in 2018.