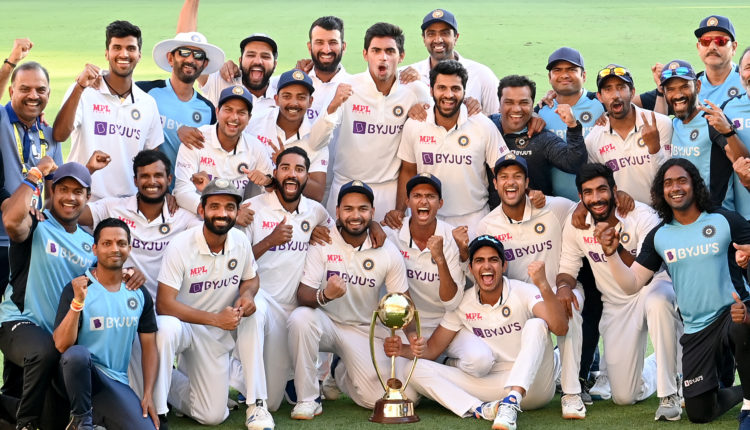 The determination and resilience showed by the Indian Cricket Team in the Border-Gavaskar test series 2020-21 has taken the world by storm. Entire cricketing fraternity, Bollywood celebrities, politicians, youth…everyone is in awe of the men in blue.

Wicketkeeper Rishabh Pant stole the show on Day 5 of the 4th test match with his well-planned knock of 89, which led to India winning by 3 wickets to win this series by 2-1. He won the Man of the Match award for his excellent knock under immense pressure.

This victory under the captaincy of India’s ace batsman Ajinkya Rahane will be remembered for a long time since most of the experienced players in the team was out of action after succumbing to different injuries. Also, Virat Kohli left the series midway to attend his pregnant wife when India slumped to 36 all out in the first Test match.

The win is historic as India became the first team to defeat Australia at The Gabba after a long time span of 32 years. Australia lost last time in 1988 when most of the players in the current Indian team were not even born.

India retained their No. 1 position in the point table of Test Championship by winning this match. India also dethroned Australia to become No. 2 Team in the Test Rankings below New Zealand.

Social media is flooded with posts by the cricketing fraternity from all over the world. They are overwhelmed by the heroics of the Indian cricket team and expressing their happiness on Twitter. To make your job easy, We have clubbed the best tweets.

?? George H.W. Bush had just won the US Presidential election

? Sachin Tendulkar was still one year away from making his Test debut pic.twitter.com/87DmsDXDqo

Only issue with India beating Australia in such an INCREDIBLE manner, is that the Test was played in Brisbane.
A city that doesn’t deserve an event so good! ?

Pant – the boy who turned into a man today in Australia, in cricketing terms!

But basically, Australia are down to third and India are now on top! #AUSvIND pic.twitter.com/IIgjpByAJ8

What an absolutely marvellous victory for our team!!! Stayed up all night to watch it unfold ball by ball. Now will sleep peacefully for a bit and savour this historic moment. Love to all our boys and greatly admire their resilience to power us through to this win. Chak De India!

We are all overjoyed at the success of the Indian Cricket Team in Australia. Their remarkable energy and passion was visible throughout. So was their stellar intent, remarkable grit and determination. Congratulations to the team! Best wishes for your future endeavours.

Congratulations to India's talented young cricket team for winning the hard-fought test series. The team showed exceptional skills and resilience. The nation is proud of their achievement.

A win for the ages for so many reasons. Incredible #AUSvIND pic.twitter.com/KRg6X2gRoC

The Indian side showed incredible class with a wonderful gesture for Nathan Lyon. ?

For all of us in ?? & across the world, if you ever score 36 or lesser in life, remember: it isn't end of the world.
The spring stretches backward only to propel you forward. And once you succeed, don't forget to celebrate with those who stood by you when the world wrote you off. pic.twitter.com/qqaTTAg9uW

India had many players injured, but what has been injured more has been the Australian arrogance & pride.
The test series has been like a movie with every member of Indian Team being a hero & some of them Superheroes.
Spiderman Spiderman tune churaya dil ka chain @RishabhPant17 pic.twitter.com/5psVFjp5Ww